Six cultists have landed in trouble after they were nabbed while fighting over a gun in Ogun state. 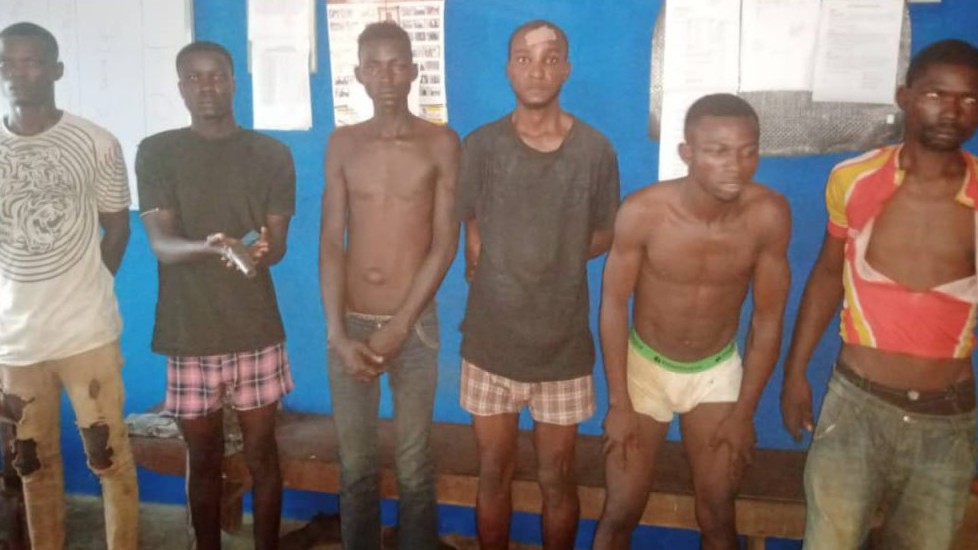 The cultists after they were caught
Six members of a cult group have been nabbed while fighting over a gun they recently purchased in Ogun state.
They were arrested by the Ogun State Police Command on November 27, 2020, in Odogbolu area of the state.
The state police spokesman, Abimbola Oyeyemi, identified the six men as Aboyeji Oluwadamilare of Isiwu Ikorodu, Adebiyi Mathew of Aleke Ikorodu, Jacob Solomon of Aleke Ikorodu, Iliasu Jubril of Isiwu Ikorodu, Olubanjo Segun of Odo Iselu Odogbolu and Samuel Olaniyan of Odo-Iselu Odogbolu.
“They were all apprehended when the four Ikorodu-based cultists came to meet the two Odogbolu suspects to foment trouble as a result of a gun transaction between the two groups.
“Investigations revealed that the Ikorodu based suspects contracted Samuel Olaniyan to purchase a locally made pistol for them, and when the gun was delivered, they discovered that the pistol was not serviceable; hence they came with full force to deal with the Odogbolu based cultists for betraying their trust,” Oyeyemi disclosed.
While the pandemonium was going on, it was learnt that a distress call was made to Odogbolu police division, consequent upon, the DPO, SP Awoniyi Adekunle quickly led his men to the scene where the six suspects were apprehended.
It was learnt that one locally-made pistol and two live cartridges were recovered from the suspects.
Meanwhile, the Ogun State Commissioner of Police, CP Edward A. Ajogun, has directed that the suspects and exhibits be transferred to the State Criminal Investigation and Intelligence Department for discreet investigation and to charge them to court on conclusion of the investigation.
Top Stories