#EndSARS: Sanwo-Olu Gives N10m Each To Wives Of Police Officers Killed In Aftermath Of Protests


Families of police officers who killed during the #EndSARS protest have received financial help from Lagos government. 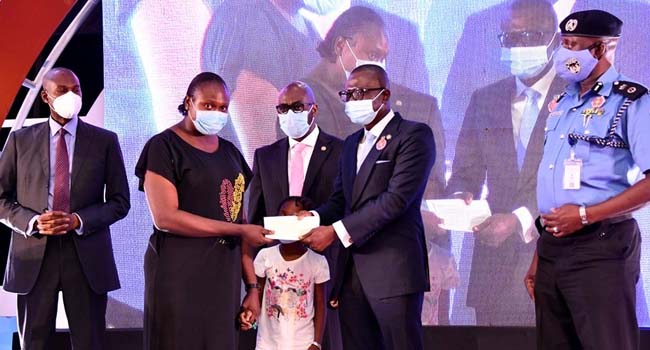 Sanwo-Olu presenting checks to families of the late officers
Wives of six police officers who died during the aftermath of the #EndSARS protest have received N10 million each from Lagos state government.
The money was presented to them by Governor Babajide Sanwo-Olu on Thursday.
Sanwo-Olu’s gesture was in fulfilment of his earlier promise during a meeting with police officers at the State Police Command.
“Some of our gallant police officers paid the supreme price for our security and safety during the recent EndSARS protests,” the governor said while presenting the cheque to the wives and children of the slain officers at the 14th Town Hall meeting on security held at Civic Centre on Victoria Island.
“These are the officers deployed to protect our families from hoodlums but they were lynched in the violence. Today, I am happy to announce and present N10 million compensation through LSSTF to each family of the officers. All their children have also be placed on scholarship up to university level, courtesy of the State Government.”
The late police officers are Yaro Edward, an Assistant Superintendent of Police (ASP); Inspector Ayodeji Erinfolami, Inspector Aderibigbe Adegbenro; Inspector Samsom Ehibor, Sergeant Bejide Abiodun and Inspector Igoche Cornelius.
During the event tagged “Lagos Security: Resilience in the Face Adversity” and organised by the Lagos State Security Trust Fund (LSSTF), the Lagos governor also awarded scholarships to the children of the deceased officers up to the university level.
He also restated that security is a top priority of his administration as Lagos State continues to rebuild after the violence that greeted the aftermath of the protests in October.
“We must sustain the steady progress Lagos has recorded in the security of lives and businesses. The issue of security is a shared mission. The more we are able to engage the citizens, the better we will become at nipping crimes in the bud. Our Government will continue to proactively engage all stakeholders as part of the ongoing exercise to address all security concerns,” he explained.
“We have taken a proactive measure of making the necessary budgetary provision for security. We will be committing N37.8 billion to Public Order and Safety in 2021 because we fully understand the correlation between development and security. We will stop at nothing to flush out criminal elements whose sole aim is to foment chaos and perpetrate crimes. Lagos will offer no hiding place for bandits and criminals.”
Early October, thousands of Nigerians thronged to the streets, calling for an end to police brutality and extra-judicial killings by the now-defunct Special Anti-Robbery Squad (SARS).
A largely peaceful demonstration in several parts of the country, however, later turned violent with arson, looting and killing of security personnel and civilians alike after it was hijacked by hoodlums.
Top Stories