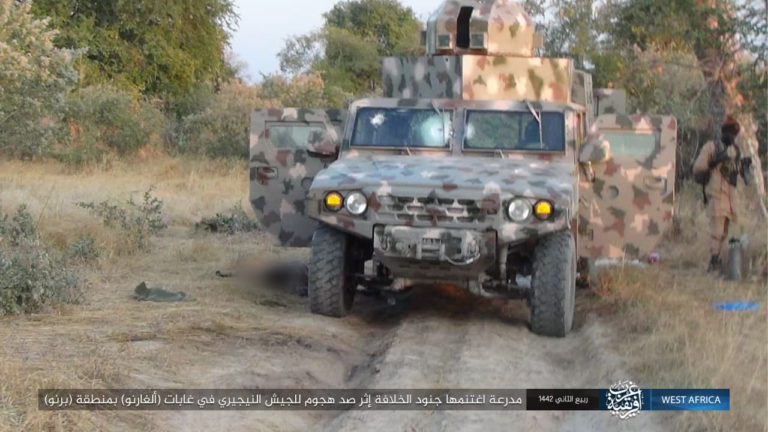 APC vehicle captured by terrorists
An up-gunned Kia KIA KLTV181 Armoured Personnel Carrier delivered only this year has been reportedly captured by ISWAP terrorists.
This happened after the dreaded terrorist group, the Islamic State West Africa Province’s (ISWAP) commonly known as Boko Haram reportedly ambushed the men of the Nigerian Army advancing in the dreaded Alagarno forest – Timbuktu triangle area, leading to multiple deaths and vehicles.
According to a report by HumAngle, Amaq; a news outlet linked to the Islamic State of Iraq and the Levant (ISIL), on Tuesday, December 8, shared pictures of vehicles captured and destroyed in the ambush.
One of the vehicles in Nigerian Army camouflage pattern was a new Toyota Landcruiser (Buffalo) Guntruck and the other the newly inducted Kia KIA KLTV-181 military tactical-utility vehicle designed and manufactured by Kia Motors Corporation. 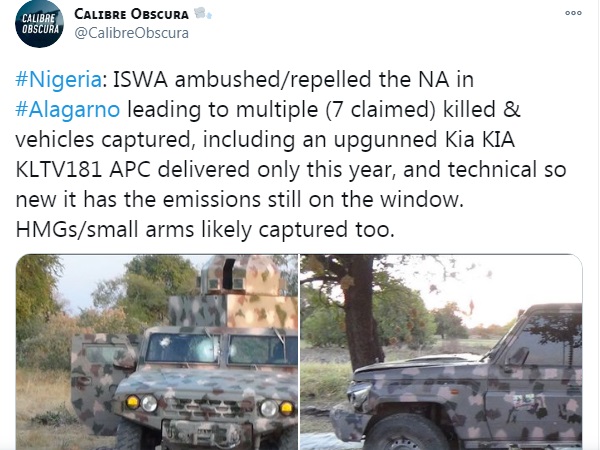 An arms researcher identified as Calibre Obscura took to the micro-blogging platform on Tuesday to tweet on the incident, he wrote,
“ISWA ambushed/repelled the NA in #Alagarno leading to multiple (7 claimed) killed and vehicles captured, including an up-gunned Kia KIA KLTV181 APC delivered only this year, and technical[ly] so new it has the emissions still on the window. HMGs/small arms likely captured too.”
The KIA KLTV-181 in the picture appears to have been upgraded by the Nigerian Army with a local armoured turret for the gunner, unlike previous pictures of the KIA KLTV-181 in use without a turret.
The first official confirmation of the vehicles’ induction into the Nigerian Army was by Chief of Army Staff Tukur Baratai during the opening of his combined first, second and third quarters conference in Maiduguri, the capital of Borno State.
Buratai, a lieutenant-general, said the Nigerian army recently took delivery of key platforms to reinvigorate its operations.
“These include the VT4 and FT1 tanks, the KIA light tactical vehicles as well as the SH2 and SH5 self,” he said.
In January 2019, the Army chief visited KIA Motors Corporation, where they were received and was briefed by Director Special Vehicle Global Sales Group, Il-Tae Kim. 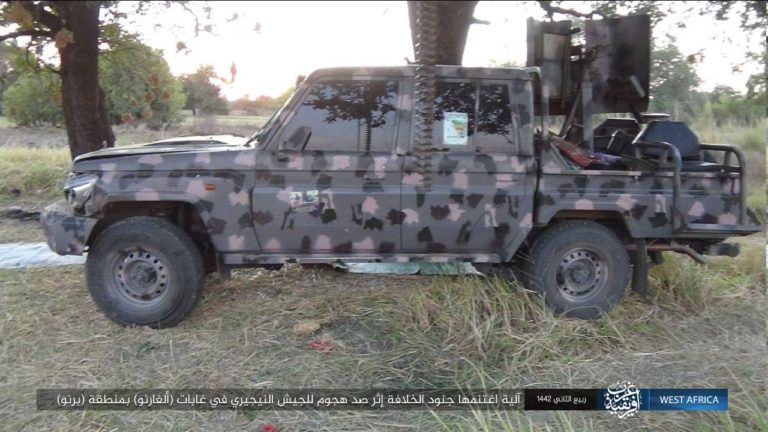