Yusufa Umar of Mai Ganji village in Danbatta Local Government told the Daily Trust on Saturday that what they heard in the media was wrong, insisting that they were not waylaid by kidnappers. 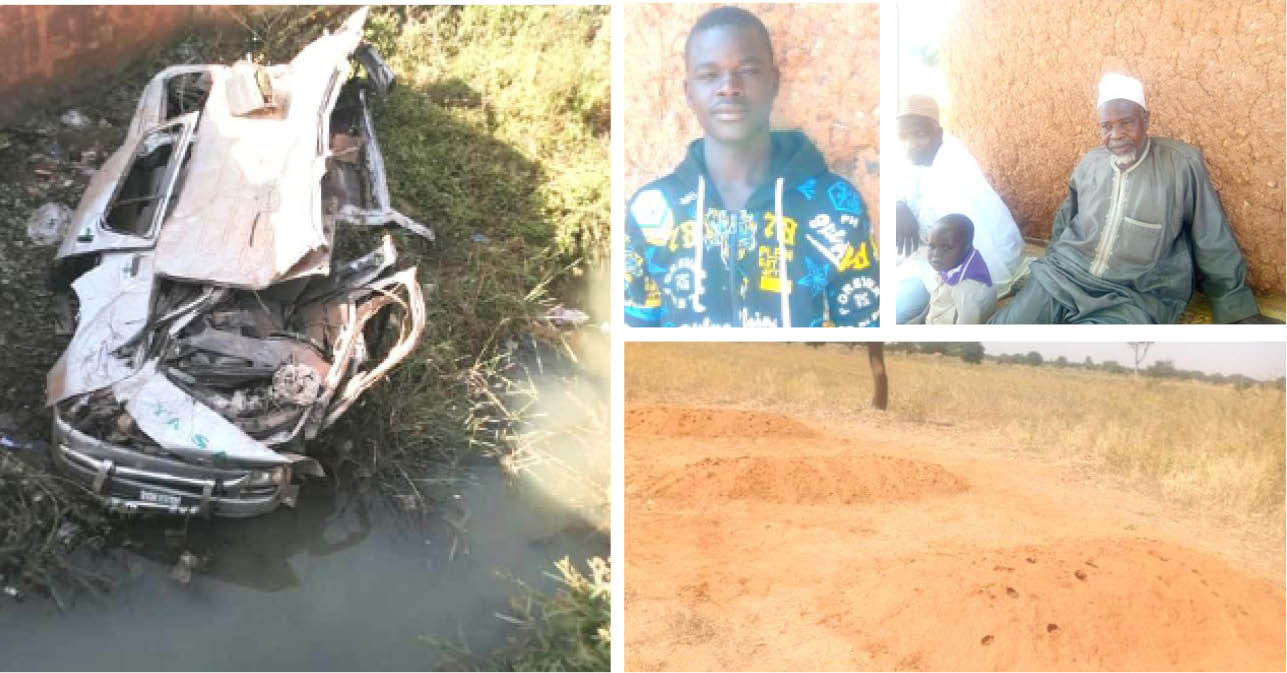 Yusufa Umar, one of the three survivors of  Tuesday’s incident along the Abuja—Kaduna road that claimed 16 lives has spoken up.

The man attributed the tragedy to accident, saying they were not attacked by kidnappers as erroneously reported.

Yusufa Umar of Mai Ganji village in Danbatta Local Government told the Daily Trust on Saturday that what they heard in the media was wrong, insisting that they were not waylaid by kidnappers.

Governor Abdullahi Umar Ganduje of Kano State had while condoling with the people of Danbatta, where the victims hail from, said the deceased were attacked by gunmen on their way to Lagos from Kano State.

Sources from the town had also told Daily Trust Saturday late Thursday that the victims, who had already been buried, met their untimely death along the dreaded Kaduna-Abuja highway when their vehicle was allegedly attacked by gunmen.

Our correspondents who visited Danbatta yesterday confirmed that it was an accident that claimed the lives of the travellers.

The Kaduna State government and the police in the state had refuted the earlier reports, clarifying that the incident was that of a lone accident and that the vehicle was not attacked by gunmen.

Daily Trust Saturday gathered that the car was carrying 19 passengers aged between 18 and 40 when one of its tires burst and it somersaulted into a ditch around Rigachikun in Kaduna State.

Survivor Yusufa Umar gave a vivid description of what happened.

“We left Danbatta for Lagos on Monday around 6 pm. We were 19  in number, including the driver and his assistant.

“The incident happened in Rigachikun, Kaduna State, around midnight. I was asleep when it happened and after a while, I just felt we were not moving. Then I felt something hit my body. Then, I saw people surrounding me.

“I stood up, and they asked where we were coming from and I said from Lagos because I was semi-conscious. But our bus was not coming from that direction, so they suggested I should rest a little to regain full consciousness,” Umar said.

“Later, I realised what had happened and that many of my friends have died. I told them we are from Danbatta on our way to Lagos. They called the fire service personnel who took all of us to the hospital where some of our colleagues later died. Three of us survived.

“When we were brought to Danbatta, another one died at the hospital. So it is only two of us that are alive. The name of my colleague is Hamisu who is still in the hospital. However, the spare driver also survived and he is from Tsakuwa town in Dawakin Kudu Local Government Area of Kano State.”

On whether they were attacked by gunmen along the road, Umar said there was nothing like an attack,  insisting it was an accident.

“We had a tire burst which caused the accident. When the tire pulled out of the bus, we hit the other side of the road and fell into a gutter. Twelve people died instantly, two later died in hospital in Kaduna and one died on our way to Zaria, while the other one died in Danbatta hospital. So only three of us survived, myself, Hamisu and the spare driver, who broke his hand and leg.

“I have been going to Lagos for just one year, we are all doing our business (metal scavenging) in Daleko, Mushin Local Government Area of Lagos State. I am not married, very few are married with some already engaged,” he added.

Umar also said of the 16 people that died so far, seven were from Mai Ganji village, three from Kwadage, three from Gwarabjawa, two from Sansan and one from Danbatta town all in Danbatta Local Government Area.

An elder brother to one of those who died, Saifullahi Lawal, said the sum of N340,000 was paid to the hospital before corpses of their relatives were released for burial.

He, however, said the bill was settled by godfathers of the victims doing business in Lagos.

According to him, “My younger brother Badamasi Muhammad Lawal, who was among those that died in the accident used to travel alone. This is his first time of travelling in a group.

“Before their departure, he kept coming back and forth to the house to the extent that our mother had to ask if he will shelve the journey because it was already around Magrib (sunset) prayer.

“His girlfriend escorted him to the car before they left, not knowing that they will never see again.”

One of the deceased foresaw his death

Lawal also said only one of the deceased persons was married and most likely had a feeling that his time was near. “He told his wife before they left that he may never come back, but warned her not to tell anyone,” he said.

His uncle, who was by his bedside, confirmed that though his injury was not severe, he is still having some pains as a result of the accident.

Alhaji Hamza of Kwadage village said it was tragic for him to have lost two of sons in the fatal accident.

“I lost two sons – Sadi and Hamza, who have been travelling there for some years now. They were both in their mid-20s and none of them is married,” he said.

Similarly, another father, Malam Ibrahim of Kwadage village said his son Lurwanu Ibrahim had been doing business in Lagos for the past five years.

“The last time he came, he spent about 40 days before leaving for this journey, not knowing that we will never see again,” Ibrahim said.

Our correspondents in Kaduna also gathered that the 16 travellers died in an accident along Kaduna-Zaria highway in Rigachikun, Igabi Local Government Area of Kaduna State.

The accident, which occurred in the early hours of Tuesday, December 8, 2020, claimed 16 lives while three survivors were earlier moved to St. Gerard’s Hospital Kaduna before they were conveyed to Kano for further treatment.

Our correspondents, who visited St. Gerard’s Hospital Kaduna, gathered that the survivors had been handed over to their relatives and conveyed back to Kano State. According to the hospital’s Medical Social Worker, Francis Uchara, about 14 victims were brought to the hospital on Tuesday out of which only three survived.

He said: “The victims were brought to the hospital by the police and Road Safety personnel with accident-related wounds. Some were already dead while others were in critical conditions. We treated them, but some died, later on, leaving only three.

Daily Trust Saturday reporters also visited the scene of the accident along Kaduna- Zaria Highway yesterday and reported that the Hummer Toyota bus with Kano registration number FGE 552 ZS is still inside the ditch four days after the accident.

A resident of Rigachikun, who simply identified himself as Kamal, told Daily Trust Saturday that he helped evacuate the victims around 1:30 am. Although he couldn’t explain what led to the accident, Kamal said he was awoken by a thunderous sound which made him and other residents rush out of their rooms.

“We were sleeping around 1:30 am when we heard a loud sound outside with people screaming help, help! When we came out, we saw bodies lying in the middle of the road while some were inside the ditch. Their belongings were scattered all over. It was a terrible accident,” he said.

The Kaduna State Police command had on Friday debunked reports that the 16 passengers were killed by gunmen along Abuja-Kaduna highway.

He expressed the command’s condolences to the government and people of Kano State and prayed for the repose of the souls of the deceased and give their immediate family the fortitude to bear the irreparable lost.

Efforts to get reactions from the Kano State governor on how he got the information that the victims were attacked by gunmen proved abortive as his Chief Press Secretary, Abba Anwar, who issued the statement on Thursday, could not be reached for comment.

However, sources in the Government House told Daily Trust Saturday that the governor must have been misinformed by early reports from local media in the state, who had quoted a younger brother of one of the victims to have confirmed that the victims were killed by unknown gunmen.

Another source, who asked not to be named, said “you know when you hear anything relating to people dying on Kaduna-Abuja highway, the first thing that comes to mind is gunmen attack because of the recent happenings on that road.