Inside Story Of How Police Massacred 6 People In Port Harcourt


The police in a statement shortly after the gruesome massacre claimed that only one person was killed, but after the dust raised as a result of the shooting settled, five persons were confirmed dead. 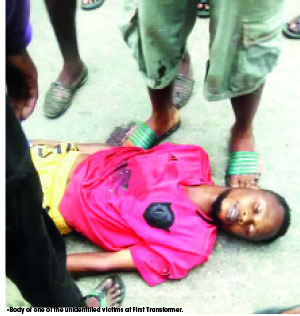 This Sun News report provides insight into the killing of people by police in Port Harcourt.

Daredevil trigger-happy officers of the Nigeria police on December 10, 2020 caused havoc in Port Harcourt,  Rivers State as they shot dead six young men and left many others with bullet wounds.

The police in a statement shortly after the gruesome massacre claimed that only one person was killed, but after the dust raised as a result of the shooting settled, five persons were confirmed dead.

Trouble started when a team of policemen with a  hilux van stopped a tricycle (Keke Napep)operator whose name was given as Chukwuma Nnolim, a native of Imo State,  popularly called Schoolboy and demandef for N100 at Elikpokwu Odu road, Rukpokwu in Obio/Akpo Local Government Area of Rivers State.

An eye-witness who does not want to be named said that the policemen stopped Schoolboy and demanded for N100 tip (Roger), but Schoolboy was said to have pleaded with them to endure that he has just resumed work, but the men were said to be in no mode to listen to pleas or reason with him and insisted that he must pay, but Schoolboy, was said to have maintained his grounds.

According to the eye-witness, one of the policemen at this point lost his cool and  became highly infuriated. He was said to have pulled out his gun,  pointed it at Schoolboy on the throat and shot him at close range and Schoolboy died on the spot.

Findings showed that the senseless killing triggered a protest as other Keke operators who saw what happened carried the dead body of Schoolboy to Rumuokoro police station where the assailant came from.

But other eye-witnesses said that when the protesters left the police station, some other trigger-happy policemen went on rampage and began to spray live bullets on innocent traders at Omachi junction, a  make  shift market arranged by traders after the Rumuokoro market shutdown.

Among the innocent traders murdered by by the police were Noble Mkpara, an Ogoni youth from Khana Local Government Area of the state, said to be a Mill operator at the Ouachi junction emergency market.

His relative, Tony Kennedy who was with him during the ugly incident, but was lucky to have survived narrated to our reporter how he took the dead body of Noble in a wheel barrow to Rumuokoro police station after Noble was shot dead by the police at ADP Road, but was chased away with threat by the police. Noble’s elder sister, Dumale Mkpara in tears told our reporter that she wants justice for the gruesome killing of her innocent brother.

Another pathetic incident was the brutal killing of a young man in his late 20s, who is a father of a nine-month-old baby, Emeka Abel, popularly called Akpaego who was also slain by the police bullet on that faithful day.

Akpaego, a native of Onicha in Ohaozara Local Government Area of Ebonyi State coincidentally lived at No. 2 Elikpokwu road market junction Rukpokwu where the Keke Napep operator was killed. He was said to have gone separately to Rumuokoro to sell when he was caught by the bullet. The police shot him at the upper abdomen and he died on the spot. Gift, Akpaego’s young wife, in tears told our reporter that in their Rukpokwu residence that her husband had earlier gone to Rumuokoro to sell his goods, pointing out that her husband was not among the protesters and wondered why the police should murder him. She called on the governor of the stste and human right groups to come to their aid to ensure that her husband gets justice.

Other victims of the Rumuokoro police shootings were two other unidentified young men said to be coming from a Betting Centre at First Transformer Rumuodumanya, a walking distance from Rumuokoro police station. The dead body of one of the unknown young men with red T-shirt lay at the roadside while eye-witnesses said that  the other dead body was quickly wisked away in a police van.

All efforts to contact the Police Public Relations Officer (PPRO)  of Rivers Police Command, Nnamdi Omoni  did not yield  much results as after several phone calls and when Omoni picked, he complained of noisy background.

When this reporter sent him a text message, requesting the confirmation of number of fatalilty during the shooting and also requesting to know if all the offenders have been arrested, Omoni asked for a Whatsapp line which was sent to him, but he did send any message. After another long wait, another series of calls to his phone line resumed, but Omoni didn’t pick neither did he call back.