A Facebook user detained since February over a blasphemous post he made on the platform against Islam has been ordered to be released. 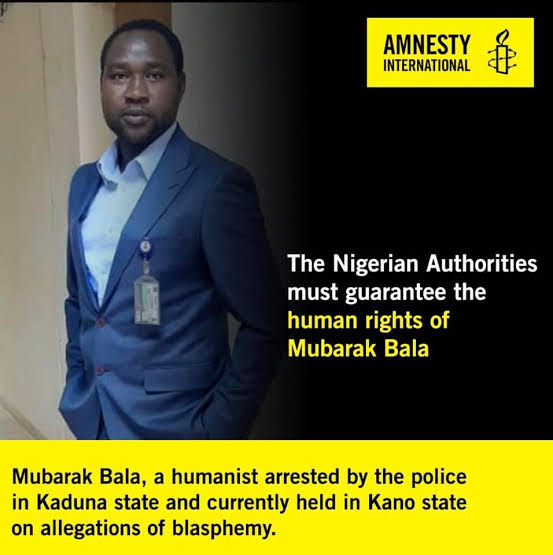 Mubarak Bala
The Nigerian Police has been ordered to release a man identified as Mubarak Bala who has been in police detention since February 2020 over an alleged blasphemous posts he made against Islam on Facebook.
According to Punch, the Federal High Court in Abuja on Monday ordered the Inspector General of Police, Mohammed Adamu, and the Nigeria Police Force, to release the Facebook user, Mubarak Bala.
He was arrested in Kaduna on February 28, 2020 and has not been seen by his family since then.
Delivering judgment in the fundamental rights enforcement suit filed by Bala, Justice Inyang Ekwo declared that his arrest and detention by the IGP and the NPF in an unknown detention centre since February 28, 2020 “because he expressed his option about religion on Facebook, constitutes an infraction of the applicant’s rights to personal liberty, fair hearing, freedom of thought, freedom of express and freedom of movement”.
The judge also declared that the action of the respondents (the IGP and the NPF) “in denying the applicant access to his lawyers constitutes a gross infringement of the applicant right to legal rep of his choice under section 34 and 35(2) of the 1999 Constitution”.
He, therefore, made an order “directing the respondents to release the applicant from detention to his lawyers on bail forthwith”.
He also made an award of “general/exemplary damages against the first and second respondents in the sum of N250,000 for the infraction of the fundamental rights of the applicant”.
The applicant had sued the IGP, the NPF, and the Attorney-General of the Federation in his fundamental rights enforcement suit, alleging that the respondents violated his rights.
Justice Ekwo observed in his judgment on Monday that the IGP and the NPF never showed up in the case despite being served with the processes in the suit filed by the applicant and the hearing notices with regard to the case.
But the judge discontinued the case against the AGF on the basis that the matter disclosed no cause of action against the AGF.
The judge ruled on Monday that the affidavit evidence put forward by the applicant not being challenged or controverted by the respondents was deemed admitted and could be relied on by the court.
The applicant was said to have been arrested by the respondents on Tuesday, February 28, 2020, and detained at Gbabasawa Police Station, Kaduna State, on the instruction of Kano State Police Command.
His lawyer stated in the suit that the applicant was arrested on the basis of a petition written by some Kano-based persons based in Kano, alleging “that the applicant insulted the Prophet of Islam Mohammed (PBUH)”.
Upon his arrest, his lawyers wrote to the Inspector General of Police requesting that he should be transferred to Abuja to face prosecution because his life was being threatened in Kano.
One of the applicant’s legal representatives, Mr Ibrahim Buba, said he visited the Kano State Police headquarters on May 4, 2020, following communications with the Commissioner of Police, Kano State, who was sad to have confirmed that he had the applicant in his custody undergoing interrogation.
Buba was made to wait for three hours after which he was asked to come back the following day.
On arrival at the CP’s office on May 5, 2020, he said he interacted with the CP who referred him to the Officer in Charge, Criminal Investigation, and Intelligence Bureau.
The O/C CIIB was said to have declined any information about the whereabouts of the applicant claiming he was still undergoing interrogation outside Kano.
Buba also said he interacted with other police officers at the Kano Command and the Force headquarters who said the applicant was moved to Abuja.
“As of the time the suit was filed, the whereabouts of the applicant, though within the knowledge of the first and second respondent (the IGP and the NPF), was not known to his representatives,” Justice Ekwo noted in his judgment.
Top Stories