The suspect was arrested by the marine officers on patrol following her inability to give a comprehensive explanation of the true owner of the baby. 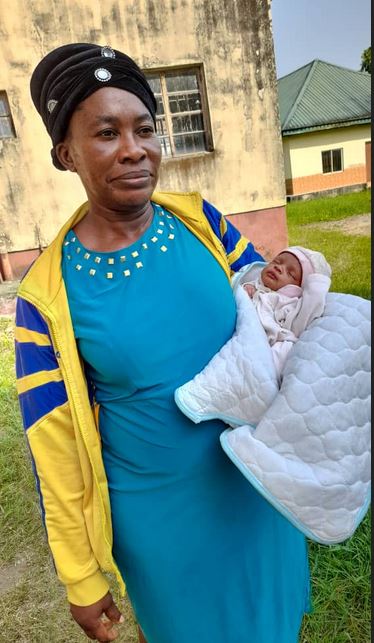 A three-weeks old baby suspected to be a victim of child trafficking has been rescued by officials of the Marine Patrol team of the Nigeria Immigration Service.

The Cross River Comptroller of NIS, Mr Okey Ezugwu, who spoke with Vanguard on the incident in Calabar, said that the suspected child trafficker, Mrs Maureen Awokara, was arrested on Dec. 19, 2020, at the high sea.

Ezugwu said that the suspect was arrested by the marine officers on patrol following her inability to give a comprehensive explanation of the true owner of the baby.

He said: “A few days ago, our officers at the marine patrol at the international waterways intercepted one Maureen Awokara, who claimed to be a native of Imo state with a three-weeks old child.

“During the arrest, she came up with all stories that were not adding up. Initially, she said the child belongs to her sister, yet we have carried out a preliminary investigation and all the lines she gave us to reach the sister, one Chioma Iweh was not connecting.

“At this point, we are going to hand her over to NAPTIP for further investigations. The preliminary investigation gives us every reason to believe that the little child is been trafficked.

“The suspect claimed she is going to Cameroon, Gabon and wherever. We are suspecting a cartel deal because over time, we have had a lot of surveillance and serious checks at our border basis and the airport, making it impossible for any of them to use these routes.

“We are looking at a situation where they have now devised a means of using the waterways, using small boats to take away these little children along,” he said.

He further explained that efforts by the command to get in contact with other family members to ascertain if the family members were in agreement for her to take the baby away have proved abortive because the suspect was not willing to give them useful information on the matter.

Ezugwu disclosed that the NIS marine patrol team will continue to police the waterways with a view to ensure that all forms of child trafficking and other act of criminality are suppressed.

He urged parents to always watch over their children with love and care and shun any form of allowing their children to be trafficked for monetary purpose.

On her part, Maureen Awokara, 40, said the baby belongs to her younger sister who could not afford to take care of her after delivery on Dec. 2, 2020.

She said that the younger sister decided to give her the child because she has been married for 18 years without a child.

“She gave me the baby in Imo state; since they brought me here, I have been trying to get in contact with her but her number isn’t connecting.

“The only time her number went through, I only heard a man’s voice, which was not her own,” she revealed.

“My younger sister is about 20 years. This is not her first time of giving birth; but, we don’t know where the first child is as we speak,” she said.