Polytechnic students across the country might have reason to be concerned after ASUP hinted that it might embark on strike next year. 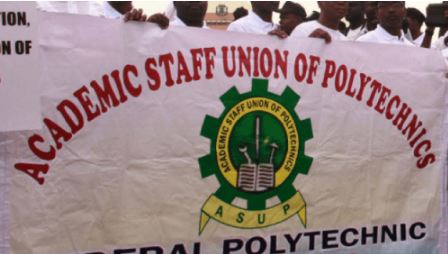 ASUP
The federal government might have another problem on its hands after the Academic Staff Union of Polytechnics (ASUP) said it might embark on strike in the first quarter of 2021.
In an interview with SaharaReporters on Thursday, the President of the union, Anderson Ezeibe, said the union had yet to take a position on the issue but would not rule out the possibility of going on strike early next year.
Ezeibe said the union would review the response of the government to its demands, which would determine its next line of action.
He said, "We could have gone on strike in November but it was deferred. We haven't decided yet but the position of the union will be revealed in the first quarter of 2021, upon assessment of the response of the government to the demands of our union."
Highlighting the issues that could make the union resort to strike, Ezeibe said: "The inadequacy of the implementation of the Integrated Personnel Payroll and Information System (IPPIS); the non-implementation of assessment study reports of polytechnics in Nigeria; non-reconstitution of governing councils of federal polytechnics; non-payment of salaries in many state polytechnics; non-release of minimum wage arrears for workers both in federal and state polytechnics; victimisation of union officers at the Institute of Management and Technology, Enugu, Rufus Giwa Polytechnic, Owo and Federal Polytechnic, Kogi."
He added that union officers were victimised by the managements of the three institutions and that the matter must be properly addressed.
"In IMT, Enugu, the management dismissed five of our union officers two years ago for participating in union activities. In Udi, one was also dismissed. In Rufus Giwa Polytechnic, Owo, two of them were dismissed, one has been called back while the other person is left."
Top Stories