A pretty Nigerian lady has been disfigured after being attacked by a married woman who accused her of sleeping with her husband. 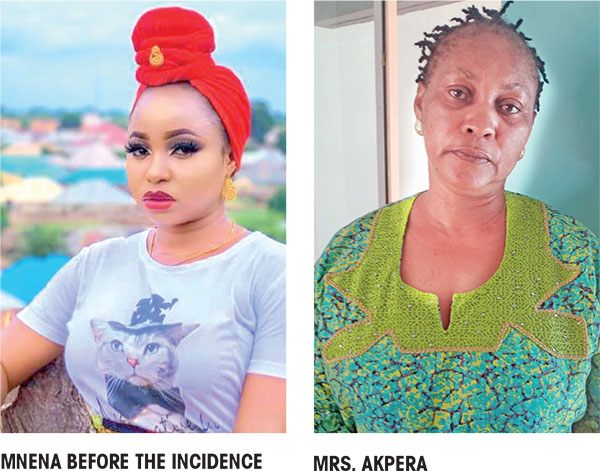 The woman attacked her alleged husband's sidechic
A married woman from Benue state has left a 26-year-old lady permanently scarred after attacking her with hot water. She accused the young lady of having an affair with her husband.
In a report by Daily Sun, the  26-year-old lady, Mnena Akpera, has recounted how her boss’ wife, Mrs. Faith Udende attacked her.
As a result of the incident, the lady, the daughter of a former Commissioner in Benue State and a consultant with the newly established Benue Television is currently battling for her life at the Amenity Ward of the Federal Medical Centre (FMC), Makurdi. Narrating her ordeal to our correspondent, the young lady who is still nursing the wounds from the hot water poured on her face, arms and breasts insists she had no romantic relationship whatsoever with his boss, Mr. Jeff Udende, whose wife caused her the grievous bodily injuries.
How our relationship started – Akpera
The lady with a diploma in Film and Television production from Multichoice and Pan-Atlantic University, and working in Abuja before she came home to Gboko, Benue State, as a result of the COVID-19 pandemic, narrated how her contact with the man started on April 26, 2020. That was the day she said that Jeff called to inform her that her services were needed at the new Benue TV that was in the offing.
“When he called me, I was in Gboko with my parents and I told them” she said. “They prayed for me and I arrived Makurdi the following day. When I came, we held a meeting with the Chief Press Secretary CPS) to the Governor. When the CPS saw my CV and the works that I had done, he asked me if I would be able to work with someone to head the content department and I said yes.
“I was actually lodged at Trust Resort Hotels on April 24th where other members of the Benue Television crew were staying. However, after I stayed there for two days, I went back to Gboko, a day after the interview with the CPS. While in Gboko, Jeff called me to say that there was going to be a stakeholders’ meeting and they needed a director to direct the show. So, I had to come back to Makurdi from Gboko. He asked if I knew any of my friends that stay in Makurdi and can accommodate me for a short while. I told him yes.” She said it was from her friend’s house that she was attending broadcast meetings until her friend’s rent expired and she decided to quit the accommodation.
The accommodation problem that caused the suspicion
Mnena explained that after she lost her accommodation at her friend’s place, she approached Jeff again and told him of the need for the organisation to provide her with an accommodation as had been done for other consultants. “When I told him about it, he said the Governor would soon release money for accommodation and that I should go to his family house and that he was going to talk to his father and his wife about it. He said he would tell them that because of my accommodation issue, I would stay there in the meantime. That was what led me to going to stay at his house after he sought permission from his father and his wife.” 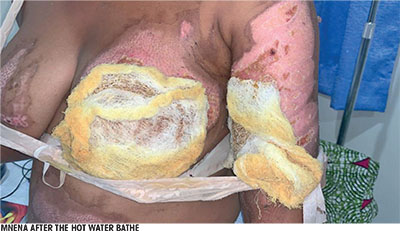