After robbing a trader of her N30,000, a notorious gang of three have confessed how they did it in Edo. 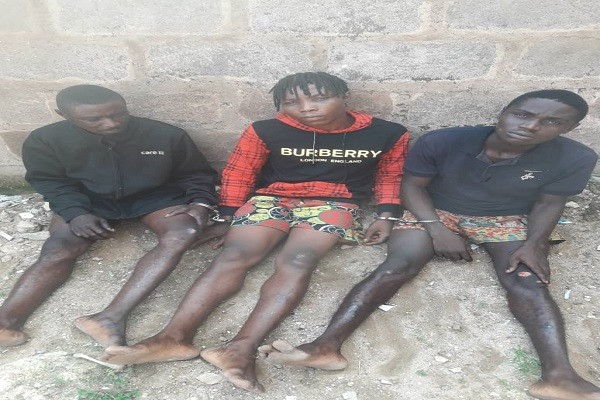 The notorious gang killed the woman after robbing her
A young Nigerian man has confessed to the police how he, alongside his gang members robbed a female trader before forcefully sleeping with her and eventually murdering her in Edo.
The tragic story was confirmed by the Edo State Police Command on Friday December 25.
Three of the suspects have been arrested.
The incident happened along Evbuosa Road, near in Obozogbe in Orhionmwon local government of the state while the woman was on her way to the market.
It was gathered that the suspects dispossessed the deceased of N30,000 before dragging her into a nearby bush, where they took a turn to rape and later left her with life-threatening injuries which resulted to her death.
The vigilante group in the area said some persons who were on the farm heard the woman screaming but could not find her when they got to the scene because the suspects dragged her further into the bush.
According to vigilante member, a shirt was found in the area was used to trace the owner in the community.
The owner later identified as Destiny Osa was subsequently arrested by the locals and handed over to men of the Ugo Police Division, who in turn handed him over to men of the Anti Kidnapping and Cyber Crime Unit of the Edo State Police Command for further investigation.
Upon interrogation, Destiny Osa told the police how they attacked, robbed, raped and murdered the woman in the bush at about 7 am on December 19, 2020 and took the police to arrest two other members of the gang, Etim Zion and Samuel Jeremiah, both from Akwa Ibom state.
Osa later led the police and another investigative team to the site the woman was gang-raped where her wrapper and hair attachment were recovered.
Confirming the arrest, spokesperson of the command, Chidi Nwabuzor, said body of the trader was deposited in the mortuary for autopsy and further investigation.
Nwabuzor, said no one had come to claim her body and advised anyone whose family member left home since Saturday, December 19, 2020 to Evbuosa and had not returned home to contact the office of the Anti Kidnapping/Cyber Crime Unit of the Edo State police command in Benin city.
Meanwhile, the spokesperson assured that the suspect would be charged to court for prosecution.
Top Stories