The angry youth under the aegis of Urhobo Youths Leaders’ Council disrupted commercial activities and chanting solidarity songs while denouncing the development. 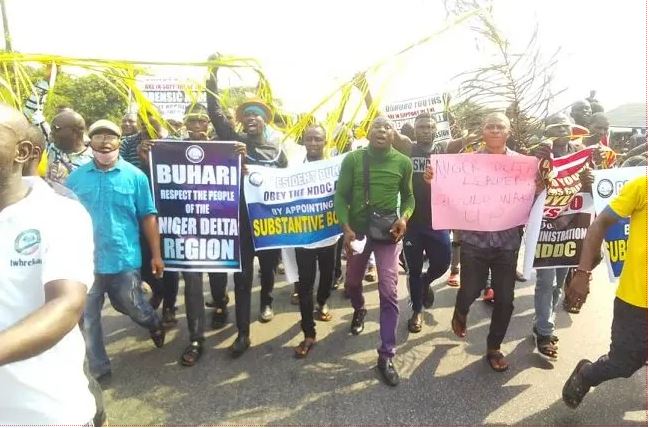 It has been revealed that some Delta youths on Thursday blocked the Delta State axis of the East-West road, in protest.

They are protesting the appointment of a sole administrator for the Niger Delta Development Commission (NDDC) by President Muhammadu Buhari.

The angry youth under the aegis of Urhobo Youths Leaders’ Council (UYLC), disrupted commercial activities and chanting solidarity songs while denouncing the development.

They issued President Buhari a 20-day ultimatum to appoint a substantive board for the NDDC or be ready for a showdown.

Tribune Online reports that travellers were stuck in East-West road as movements to and from Port Harcourt, Bayelsa was disrupted for several hours.

The youth were also armed with tugs of trees and placards bearing various inscriptions such as, “President Buhari, obey the NDDC Act by appointing a substantive board,” “Urhobo youths are angry,” and “Urhobo youths are in support of the forensic audit, but appoint a board for the Commission.”

Others include “President Buhari, enough of politics in the Villa over NDDC and put in place substantive Board,” “Our roads are bad” and “We need a substantive board in NDDC,” among others.

Coordinator of UYLC, Comrade Lucky Emonefe, in a chat with journalists, said the Urhobo youths were in support of the forensic audit ordered by President Buhari, stressing that “those who are corrupt should face the consequences of their actions.”

He called on President Buhari to obey the law, especially provisions of Section 2 of the act establishing the NDDC by inaugurating a substantive board, rejecting the politics allegedly being played with the future of the agency and the entire people of the Niger Delta.

He said: “There are some group of persons playing politics in the Villa over the NDDC matter. They want to personally acquire the NDDC as their personal properties.

“This is a board that’s made up of persons from different states. What we can have is just a sole administrator.

“We as youths of Niger Delta, we reject the sole administrator appointed by Mr. President. We want Mr. President to obey section 2 of the NDDC Act by inaugurating the Board.

Comrade Emonefe vowed to mobilise youths to shut down all critical oil and gas assets belonging to the Federal Government in their next protest if their requests were not granted.