The police in Ondo state has confirmed the arrest of a man who reportedly raped and tried to pluck out his victim's eyes. 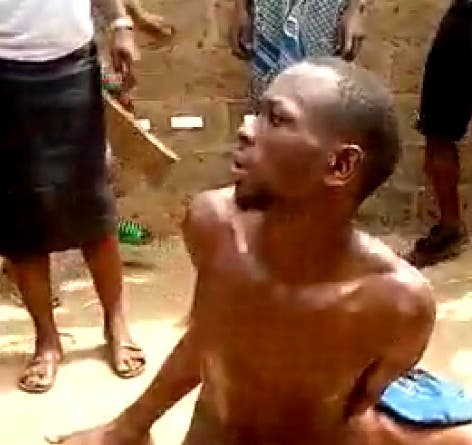 The suspected rapist after he was caught
The case of a man who was beaten mercilessly for allegedly raping and trying to pluck out the eyes of his victim has been confirmed by the Ondo State Police Command.
According to the police in the state, investigation into the incident has started.
Speaking with SaharaReporters on Wednesday, the Command's spokesperson, Tee-Leo Ikoro, however, said the video might be old.
According to him, the state Commissioner of Police, Bolaji Salami, has ordered an investigation into the matter to ascertain the veracity of the issue.
Ikoro said there had been no formal report at any of the police divisions in the state regarding the incident.
He said, "We also saw the video and it has gone round the entire command. We have spoken with all the police stations. I think it is an old video from somewhere that people are trying to impose on some set of people.
"However, the CP has ordered all the divisions within the places of mention to go investigate to find out whether it is real because no one has come with a formal report to any of the stations.
"I just communicated with one of the stations now. I have gone to the operations department to see if they have anything like that. The video has gone viral and everyone is saying it's from Ondo State.
"As I speak with you now, we've not been able to ascertain where it happened and when but we suspect it's an old video bloggers are trying to make viral.
"All the divisions in the command have been asked to investigate it so we can get the truth but for now, nothing out of anywhere."
On Tuesday, a video of a naked man being tortured by residents of Oluwatuyi in Akure went viral on social media.
He was said to be a Fulani man and alleged to have raped a young lady and was in the process of removing her eyes when he was caught.
In the video, the victim was seen lying naked beside her alleged attacker, with blood on her body.
Residents were heard screaming and questioning the criminal as regards what the victim had done to deserve what was done to her.
The alleged attacker was paraded naked alongside his victim and beaten with a plank.
Top Stories