One Rescued In Lagos Building Collapse


The survivor who was rescued from the collapsed building was badly injured following the impact of the incident. 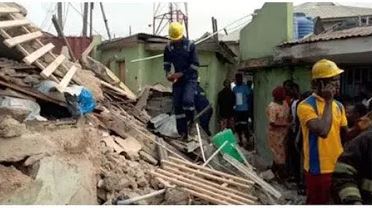 One Rescued In Lagos Building Collapse

Emergency responders at the scene of a collapsed building at Elegbata Street, Olowogbowo area, Apongbon, Lagos rescued an adult male who was trapped underneath the building.

The survivor was injured following the impact of the incident.

According to eyewitnesses’ account, the occupants of the storey building have been given quit notices by their landlords to give room for the rehabilitation of the building, but there was a failed attempt at controlled destruction by the property owners which led to the incident.

The prompt arrival of emergency responders was said to have prevented further damage as the survivor was quickly transported to a nearby hospital.

Director-General, Lagos State Emergency Management Agency LASEMA, Dr Olufemi Oke-Osanyintolu, said the state firefighters from Orile-Iganmu Division, were deployed to the scene for quick response, while the men of Rapid Response Squad, RRS, from the Nigeria Police Force, were on ground to maintain law and order.

According to him, the entire building was cordoned off to avert secondary incidents, adding: “The agency is on top of the situation.”