The suspects were charged with selling counterfeit Uni-Gold HIV test kits on diverse dates between September 24, 2019, and December 21, 2020, within Nairobi County. 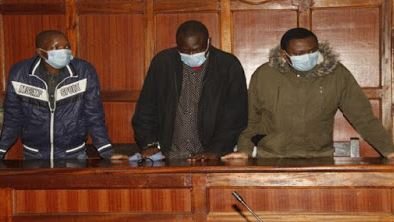 Three businessmen have been arrested and charged with selling fake and expired HIV kits to unsuspecting customers locally and abroad.

According to the public prosecutor, the three also stole HIV test kits and exported them to Guyana, a poor South American country whose GDP is 18 times less than that of Kenya.

Mwangi was charged separately with exporting 400 packets of the same kits valued at Sh800,000 to Guyana, South America on December 30, 2019, through the Jomo Kenyatta International Airport.

He was further accused of handling and exporting the 400 packets of HIV test kits in contravention of the medical law.

Njoya was also accused of being in possession of five packets of the HIV test kits that had already expired on December 5, 2020. He was found with the packets on December 22, 2020.

He allegedly committed the offense on account of being the proprietor of Intercare Agencies located at Donholm Shopping Center on Duruma Road in Nairobi.

The three denied the charges before Milimani Chief Magistrate Martha Mutuku and pleaded for lenient bond terms, saying that they are law-abiding citizens.

They were released on a cash bail of Sh100,000 each. The case will be mentioned on February 22.