It has been revealed by a suspected armed robber that a dismissed police officer supplied rifles to the Offa bank robbers. 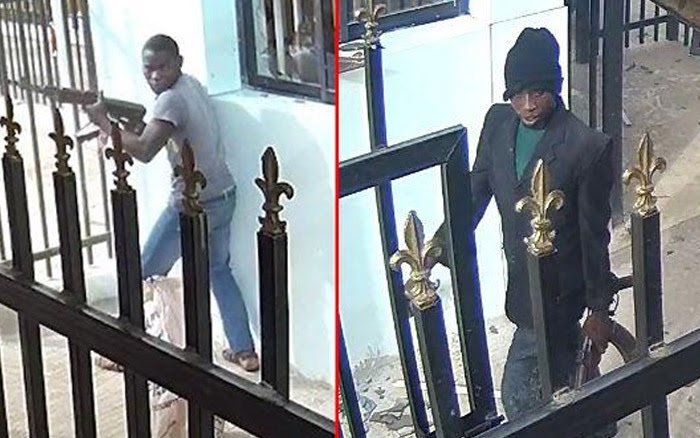 Offa robbers
Offa armed robbers who invaded a bank in Kwara state before robbing and killing many people have confessed before a court how they got 5 AK-47 rifles they used in the robbery operation.
Recall that the robbers had on April 5, 2018 attacked a bank in the Offa Local Government Area of Kwara State.
Confessing on Wednesday , the robbers told a Kwara State High Court sitting in Ilorin that they killed no fewer than 11 persons during the incident.
The suspects, Ayoade Akinnibosun, Ibikunle Ogunleye, Adeola Abraham, Azeez Salawu and Niyi Ogundiran, were all present in court during the trial.
At the resumed hearing of the case, counsel for the prosecution, Mr. Rotimi Jacob, SAN, called the seventh witness, Inspector John Nwoke, who is the cinematographer attached to the Force Public Relations Unit, Abuja.
Nwoke then presented a DVD video to the open court that contained the confessional statements of the accused persons.
All but one of the accused persons, Ayoade Akinnibosun, said that they shot dead 11 persons, who were hauling stones and other missiles at them during the robbery incident.
Akinnibosun narrated how a dismissed police officer, Michael Adikwu (now late), sold the robbery idea to him, adding that he in turn conscripted his other four accomplices into the deal.
Akinnibosun, who claimed to be the ring leader in the video, revealed that he owned the two vehicles used for the bloody operation.
He said that one of the vehicles, Lexus Sport Utility Vehicle was given to him as an empowerment grant by the then governor of the state, Abdulfatah Ahmed, as he was the leader of the Political Liberation Movement in Kwara South.
He stated, “I came into contact with the dismissed policeman (Adikwu) through a revenue collection staff. After the meeting with Adikwu, I relayed to Ibikunle Ogunleye who also relayed same to Adeola Abraham otherwise known as Adex. Azeez Salawu and Niyi Ogundiran are both mechanics by profession.
“On the fateful day of April 5th, 2018, the five of us moved from Oro, Irepodun Local Government Area of the state to Ajase-Ipo, where we parked the SUV under a tree, and we all drove in the Mercedes Benz to Offa. At Offa, we parked in front of the Total filling station, where late Adikwu was waiting for us in a black Audi car.
“There was also a Nissan Premera car parked in front of us at the Total filling station where some other people that came with Adikwu were waiting. Shortly, thereafter, Adikwu handed over a sack to me containing five AK-47 rifles.
“As the commander of my gang, I distributed the guns and directed every member to take his position. I positioned myself at the Roundabout leading to Igosun town from Offa.
“After the robbery, Adikwu did not give us a dime. He only promised to call me when it is time to share the loot. Then we all hurriedly left the community. On getting to Ijagbo, Oyun Local Government Area, our vehicle stretched to a halt awaiting Adikwu, who came and collected the five AK-47 rifles from me.”
Also speaking, Ibikunle Ogunleye said he was positioned on the First Bank premises in the metropolis before Adikwu dragged him to come along to the Offa Police Station.
He revealed that he shot dead two persons, who were trying to escape at the gate of the police station, adding that at the police station, Adikwu and his gangs fired many shots at the station, killing scores of policemen in the process.
In their own testimonies, Adeola Abraham, Azeez Salawu and Niyi Ogundiran said that they had not handled rifles prior to the robbery.
However, each of Abraham, Salawu and Ogundiran confessed to have shot dead five, two and two persons respectively to prevent being stoned to death by members of the public.
The presiding judge, Justice Haleemah Salman, adjourned the case till March 15 and 16 for the continuation of trial.
Top Stories