The Twitter user stated that he refused to allow the man to have his way with the lady because he also has a sister. 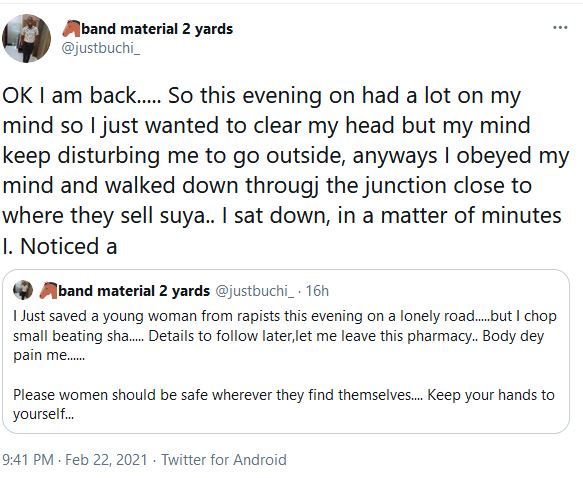 A man took to Twitter to reveal how he saved a lady from being raped by an unknown man while following a lonely road.

According to @justbuchi_, the man attacked him after he confronted him for sexually harassing the lady.

Recounting how people looked on during the fight, the Twitter user stated that he refused to allow the man to have his way with the lady because he also has a sister.

"I Just saved a young woman from rapists this evening on a lonely road.....but I chop small beating sha..... Details to follow later,let me leave this pharmacy.. Body dey pain me...... Please women should be safe wherever they find themselves.... Keep your hands to yourself...

OK I am back..... So this evening on had a lot on my mind so I just wanted to clear my head but my mind keep disturbing me to go outside, anyways I obeyed my mind and walked down througj the junction close to where they sell suya.. I sat down, in a matter of minutes I.

Noticed a Young man following a young lady down from the suya spot towards the lonely road near my street... She was saying... Hey don't touch me again while the man kept saying wetin u go fit do...

Then I stood up quietly followed them, she was well dressed obviously coming from work, yet He kept saying how much I go use fk you.... Omo I went closer to confront him and ask him young man what is wrong with you free her nau.. Omo he left the lady come face me ooo, telling me say abi na u dey kpamsh am or whatever he meant by that....

I told him keep your hands to yourself sir, next thing he said was "Guy u don fk up and I go treat you" meanwhile fear don catch me small and she don go hid for. My back....damn I don enter today, he looks rough and all but I told him Omo I have a sister I can't allow this to happen around her

Meanwhile the lady was saying he has been touching her.... I just told him off to leave her alone but before u could say Jack this young man rushed me with blows and all I asked the young lady to go a bit far so she don get injured.... Anyways we fought......

The last time I. Fought was when I was 13 I detest it but to cut long story short, he planked me on my wrist and shoulder including my right leg I threw him into the gutter close by, went to the lady to see if she was alright though I was in pains but I was alright...

Told her sorry to have gone through all of that, she thanked me profusely and I asked her not to pass through the lonely road on foot best she could use an Okada or pass the other busy road... We parted ways, the already guttered young man came out from the gutter and lastly told.

And I quote "we go jam soon... Something go hit you no worry " I smirked and took myself to the pharmacy... Thank God it wasn't too serious... PS some people saw us fighting dem no fit come separate, see the way the guy beat me

Please once again, women are not commodity

To be sold or touched anyhow without consent... Love them and cherish them without trying to rape or assault them, it is not rocket science......

OK I am back..... So this evening on had a lot on my mind so I just wanted to clear my head but my mind keep disturbing me to go outside, anyways I obeyed my mind and walked down througj the junction close to where they sell suya.. I sat down, in a matter of minutes I. Noticed a https://t.co/qb0lZFLKfi