Police operatives have arrested a woman who reportedly duped and dumped her boyfriend. 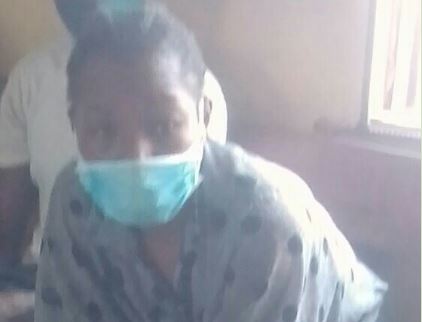 Mary Egodo
A Nigerian woman, Miss Mary Egodo, 30 has landed in serious trouble.
Egodo was arrested for duping her abroad-based fiance, Ogunshakin Emmanuel of N10m he gave her to use to buy a property in Lagos in preparation for their marriage only for him to come back to discover that she swindled him and bolted away with another lover.
P.M.EXPRESS reports that the suspect, Mary, not only duped Emmanuel, she blocked every contact and relocated to an unknown place so that Emmanuel will not locate her when he returns to Nigeria.
The lady, Mary, was said to have relocated and was enjoying the money with another lover without buying any property and was not ready to get married to Emmanuel.
However, the alleged scam was reported to the Police, who trailed and eventually arrested Mary in her hideout. She was asked to refund the money but she said that she had spent the whole money.
According to Police sources, the man, Emmanuel, who hails from Ekiti State, met Mary, who is from Delta State in Ibafo area of Ogun State, where Mary lives with her parents.
In the course of their relationship, they agreed to get married before Emmanuel traveled abroad for greener pastures with the consent of Mary.
While Emmanuel was abroad, he sent money at different times through Mary’s First Bank account with number 0491076066, with the agreement that Mary will use the money to buy land and develop it before he will return to consummate the relationship.
Unknown to Emmanuel, Mary was busy enjoying the money with her other lover and deceived him that he had already acquired the property as they agreed.
However, when Emmanuel informed her that he will be coming back to Nigeria to formalize the marriage and to see the property she bought with the money sent to her, Mary blocked all his numbers and relocated without any trace to reach her. Emmanuel was shocked and reported what happened to the Police.
The Police then tracked and eventually arrested her. After interrogation and having been found culpable, she was charged before the Ejigbo Magistrate Court for fraud and conversion of the money.
She pleaded not guilty.
The prosecutor, Inspector Bernard Aigbokhan, asked the Court to give a date for hearing for the Police to prove that she actually committed the alleged offence.
Thus, the Presiding Magistrate, Mr. E.O. Ogunkanmi, granted Mary bail in the sum of N3m with two sureties in like sum.
She was remanded in Correctional Centre at Kirikiri town, Lagos, pending when she will perfect her bail conditions.
The matter was adjourned till 19th April, 2021, for mention.
Top Stories