Luck ran out of the kidnappers when Nwuzor, who was conveying the couple to a park became suspicious upon seeing how unkept the children were and reported them to the authorities. 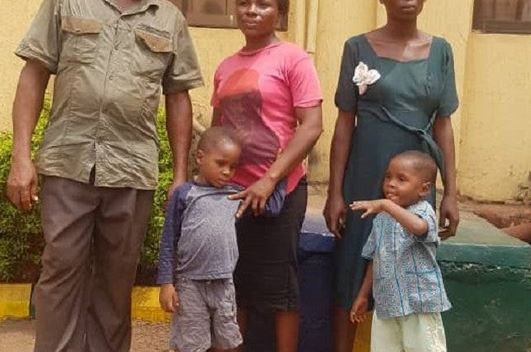 Ogwogu Chidi Nwuzor, a graduate of Ebonyi State University who drives a commercial tricycle rescued two of the three children abducted by a couple in Ikwo and Izzi Local Government Area of the state.

It was gathered the luck ran out of the kidnappers at Nkaliki Road, Abakaliki metropolis when Nwuzor, who was conveying them to a park became suspicious upon seeing how unkept the children were.

According to Nwuzor,  when he questioned them, the woman said the children were her sister’s children and that the crisis between Ikwo and Abakaliki people caused her to take them away. But he instead raised the alarm and attracted the attention of people who alerted the police.

Spokesperson of the Ebonyi State Police Command, DSP Loveth Odah, who confirmed the incident on Saturday February 27, said the children identified as Tochukwu Eze, 5, Wisdom Eze, 4, and a third victim Sopuruchukwu Ugbo, 8, have been reunited with their families and commended the efforts of the operator and residents in rescuing them.

"One of the two children that were stolen about two weeks ago identified the same woman as the person that abducted them, when the girl was describing the woman, she said she is fair and we insisted that she is not the only fair person in the society, the girl then said the woman had a wound in her hand, and that is fresh as of the time they were kidnapped. Lo and behold, we saw the wound at the same spot the girl described.” she stated.

"So far, these syndicates have kidnapped four children, while three have been recovered and one is yet to be recovered. Police are still investigating the matter to uncover more of their activities,” she added.

In an interview with one of the victims, Sopuru Ugbo, she said she was kidnapped alongside her brother at Nwezenyi and taken to Enugu where she was abandoned.

"I was going to Nwezenyi with my brother when the woman came and told me that my mother said she should buy something for us to eat. I said I was not going anywhere, she used her handkerchief on me and I stopped talking. She finally met with a man called Gwogwo, after discussing with him, she took us away," she narrated.

"We entered Keke to Onuebonyi and then entered a car to Enugu where we slept. But in the morning, I did not see the woman and my brother again. I don’t know where my brother is, my brother’s name is Enyichukwu. The woman has a wound on her arm, so immediately I saw her yesterday, I recognized her. It was a lady called Chinaza that called my mother,” she said.

The father of the rescued children, Mr Ogbonnaya Eze, commended the tricycle operator, calling him a good-spirited citizen of the state and thanked the police for rescuing his two children from the hands of kidnappers.

"Our children; Tochukwu and Wisdom were sent to buy biscuits at the neighbour’s house when these people took them. Tochukwu is five years old while wisdom is four years old. Both are in Nursery 1. In the night, one man came to us and said he saw a write-up on Facebook about two children that were rescued by a Keke rider at Nkaliki and were taken to the police station, he showed me their pictures, that was how we found out that they were rescued,” he added. 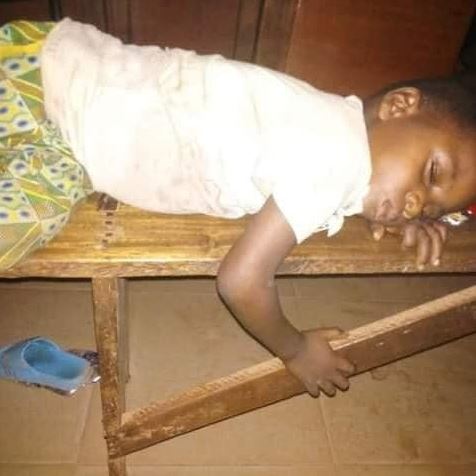 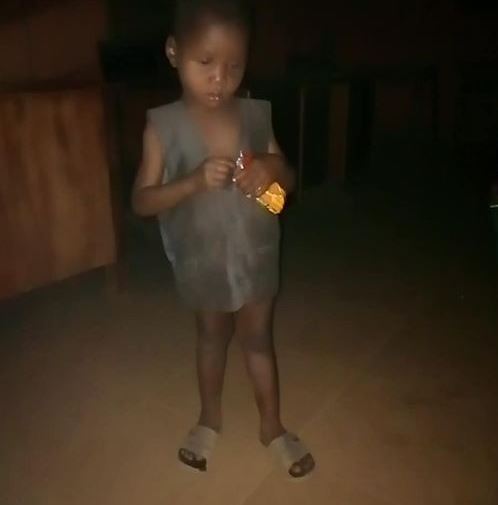 Below is Ogwogu Chidi Nwuzor's account on how God used him to rescue the children:

"Rescued from kidnappers today around 2:30pm

God used me to rescue this two little children from the kidnappers today, one gave his name as Wisdom whereas the other has not been able to speak.

"I, ogwogu chidi a keke driver and a graduate of sociology department ebonyi state University was today 25/2/2021 rescued this two brothers, as I was driving along Nkwagu afikpo road saw saw some people standing beside the road where they keke broke down and they called me to convey them to a pack where they can burder a bus to Enugu which I agreed.

"But the look of the appearance of those children made me to probe into they journey.

When I asked why they were taking those tattered and undressed children to Enugu, the woman narrated it was out of the maltreatment resulting from inter communal conflict between izzi & ikwo. That the father was from ikwo and the mother from izzi which happens to be the sister to her.

"But I didn't stop I keep asking, to the extent that I told them I was a security man and that terrified them, they couldn't reach park again but dropped at nkaliki junction, but due to their suspicious movement I followed them up when they diverted their way I alerted neighbor and police and and some interogation behold those children was been kidnapped. In case of any missing children report to police head quarter Abakaliki for clarification." 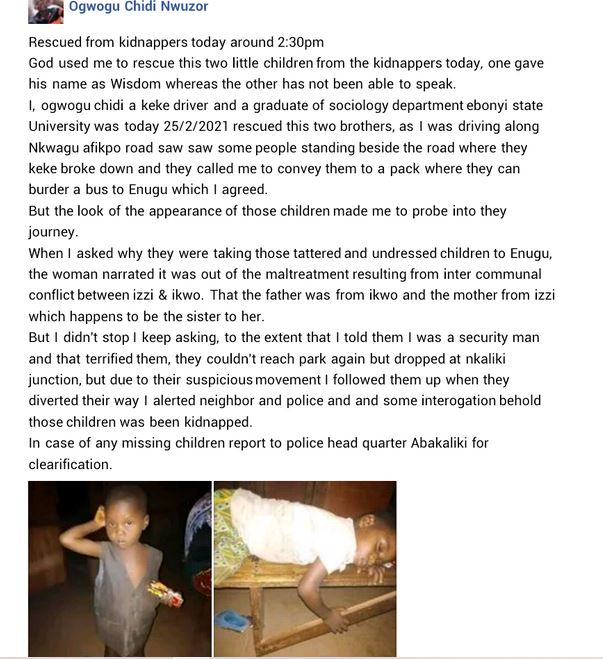