The head of the Catholic church, Pope Francis has defiled security fears to visit war-ravaged Iraq. 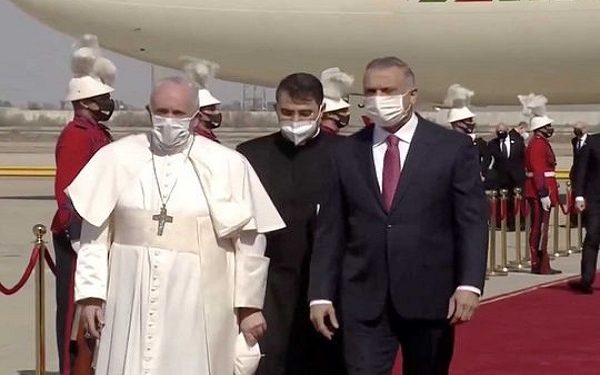 Pope Francis
Pope Francis is currently in Iraq on his first visit to the Muslim-dominated.
He arrived in war-battered Iraq on the first-ever papal visit, defying security fears and the pandemic to comfort one of the world’s oldest and most persecuted Christian communities.
His plane landed at 1055 GMT (1:55 pm local) at Baghdad International Airport, where Prime Minister Mustafa al Kadhemi greeted him.
“I’m happy to resume travel, and this symbolic trip is also a duty to a land that has been martyred for years,” Francis told journalists aboard his plane.
The 84-year-old will also reach out to Muslims when he meets Iraq’s top cleric Grand Ayatollah Ali Sistani.
The four-day journey is the pope’s first abroad since the onset of the Covid-19 pandemic, which left the leader of the world’s 1.3 billion Catholics saying he felt “caged” inside the Vatican.
While Francis has been vaccinated, Iraq has been gripped by a second wave with a record of over 5,000 new cases a day, prompting authorities to impose full lockdowns during the pontiff’s visit.
Security will be tight in Iraq, which has endured years of war and insurgency, is still hunting for Daesh sleeper cells, and days ago saw a barrage of rockets plough into a military base.
Francis will preside over a half-dozen services in ravaged churches, refurbished stadiums and remote desert locations, where attendance will be limited to allow for social distancing.
Inside the country, he will travel more than 1,400 kilometres by plane and helicopter, flying over areas where security forces are still battling Daesh terror group remnants.
For shorter trips, Francis will take an armoured car on freshly paved roads that will be lined with flowers and posters welcoming the leader known here as “Baba Al Vatican”.
The pope’s visit has deeply touched Iraq’s Christians, whose numbers have collapsed over years of persecution and sectarian violence, from 1.5 million in 2003 to fewer than 400,000 today.
“We’re hoping the pope will explain to the government that it needs to help its people,” a Christian from Iraq’s north, Saad al Rassam, told AFP news agency.
The first day of the pope’s ambitious itinerary will see him meet government officials and clerics in the capital Baghdad, including at the Our Lady of Salvation church, where a militant attack left dozens dead in 2010.
He will also visit the northern province of Nineveh, where in 2014 Daesh terrorists forced minorities to either flee, convert to Islam or be put to death.
“People had only a few minutes to decide if they wanted to leave or be decapitated,” recalled Karam Qacha, a Chaldean Catholic priest in Nineveh.
Top Stories