How Local Hunters Rescued Me, Others From Kidnappers – Osun Farmer Tells His Story


A man who got abducted while working on his farm in Osun State has narrated his experience in the hands of the abductors. 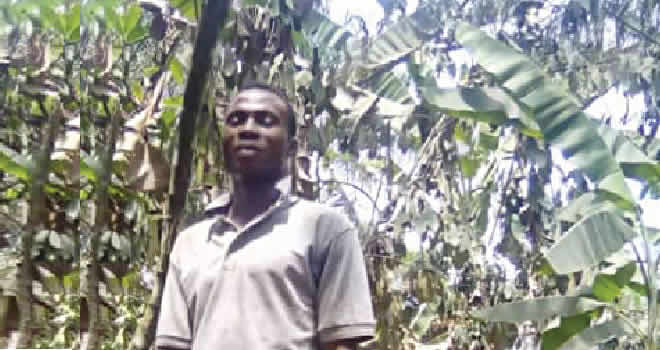 Mudasiru Adekunle, a 37-year-old farmer in Osun State, who was abducted while working on his farm in Balogun Village near Ikire, tells BOLA BAMIGBOLA his experience in the hands of the abductors.

What is your name and what do you do for a living?

My name is Mudasiru Adekunle. I am a farmer. I live in Ikire town (Osun State), but my farm is located at Balogun Village.

You were reportedly abducted by some gunmen on March 6; how did it happen?

On that particular day, I went to my farm to sell cassava to some customers. Those who brought the cassava had already paid me. I was about leaving the farm when I heard gunshots from afar. While I was still wondering who was firing the gunshots, a man holding a gun just emerged from the bush and ran towards my direction. I quickly jumped into the bush to hide myself. I saw the man run past where I was hiding. After he ran past, I came out and decided to quickly run in the opposite direction. But in the same moment, the gunman reappeared right in front of me.  At that point, I knew I was in trouble. I brought out my phone and called some hunters I know in Ikire. Unfortunately, none of them picked the call.

After thinking for a while, I chose a different route and came out of the forest. I was walking towards a cocoa plantation when I sighted the kidnappers. They also saw me and they pointed their guns at me. One of them held me and threw me to the ground. They collected my money, phone, motorcycle keys and every other thing I had on me. After that they led me to the place where their other gang members were waiting.

When I was led to where the others were, I observed two men who were shabbily dressed. There was another person wearing a shirt and trousers. He held a car key. There were other people sitting on the branches of a cocoa tree. From what I observed, the gunmen were seven in number and they had about three victims that they had kidnapped with them.

After collecting your belongings, what did the abductors do next?

They asked me if I was Yoruba or Hausa. I told them I am a Yoruba. They asked if I could speak Hausa language and I replied them that I couldn’t. The one that asked me questions spoke Pidgin English. Because of my limited education, I understood all he said, but I could not respond to all his questions.

Few minutes after, they started communicating with signs. One of them made a sign to others. They wore black clothes but they did not cover their faces.

At about 8pm, the leader of the gang came and pointed his flashlight into my face and instructed his men to return my SIM card to me. They asked me to rise up. As I stood up, I observed a light coming from one direction of the forest. I think they knew the hunters were in the bush to look for those abducted. My abductors told me to move towards where my motorcycle was parked and they followed me. When we got there, they asked me who the people carrying flashlights to look for me were; I told them I didn’t know the people carrying the flashlights. When they noticed that the flashlights were approaching our direction, they ordered me to go and I started moving. Not long after, I heard several gunshots behind me and I jumped into the bush. When I looked back, I saw that some of the abductors had been captured. It was the Hunters Group of Nigeria men who came to rescue us and captured some of the kidnappers.

Why did the abductors ask you to leave?

They probably thought once they released me, those coming to look for them would no longer bother to continue the search.

What language did your abductors speak?

Just one of them was speaking English language. Others only spoke Hausa.  I can easily identify about two of them if I see them. All thanks to the men of Hunters Group that came to rescue us. If not for them, I can’t imagine what would have happened to us.

Before you were abducted, had there been cases of kidnapping in your area?

It had happened before, but it was a long time ago.

How did your abductors treat you?

They beat me with a stick. I was wounded and that was the reason I could not go out to report at the police station after I was freed.

What do you think the government and people living in your area can do to stop kidnappings?

Government should empower the Hunters Group and authorise them to go after these criminals. They know the terrain in the bush well and they know how to operate. My abductors shot at the hunters several times. They exchanged gunfire for a long time.

Did your abductors demand ransom from your family?

They didn’t. I believe they didn’t demand ransom from my family members because I wasn’t there for long. They just pushed me out when they knew some people were already looking for them. Those gunmen worked as a team. From what I observed, they stationed one of them near the road to monitor those coming to look for people that were abducted.

After the incident have you gone back to your farm?

I am afraid to return to the farm. I was kidnapped around 6.30pm and I was freed around 8pm. I am afraid to go back to the farm, but I have no other work. I didn’t even learn any vocation. I am a farmer and I have a wife and two children to feed.