Suspected internet fraudsters have been apprehended at a hotel in Ondo state. 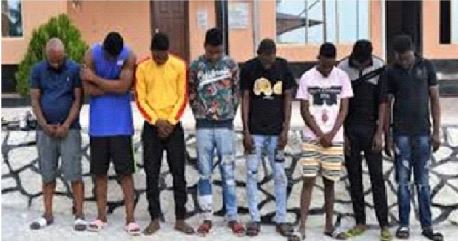 The suspected fraudsters
At least eight suspected yahoo boys are now in the custody of the Economic and Financial Crimes Commission after being arrested in Ondo state.
The internet fraudsters were rounded up at their hideout in Oba-Ile in Akure, North Local Government Area of the State.
The operatives of the anti-graft agency who stormed the state from the Ibadan Zonal Office, apprehended the suspects at a hotel in Oba-Ile Housing Estate.
According to sources, the operation was hinged on intelligent report linking the suspects to alleged fraudulent activities, ranging from scams on numerous dating sites, as well as obtaining money under false pretense, among others.
During the raid, three exotic cars, mobile phones and laptops alongside several incriminating documents were said to have been recovered from the suspects.
The arrested eight suspects included: Olasukanmi Daramola, Oluwaseyi Akinluyi, Abiola Mutiu, Adebanjo Adegoke and Keyinde Idowu, Sunday Morufu, Adebayo Odewunmi and Ridwan Tobiloba.
Meanwhile, it was gathered that the suspects would be charged to court as soon as investigations are concluded.
Top Stories