The insurgents stormed the community, shooting in all directions before ramming a pick-up truck loaded with explosives into the military base. 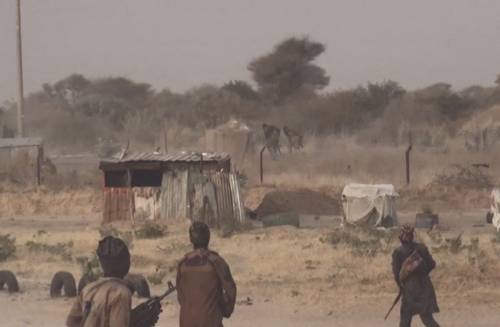 According to a report by SaharaReporters, some militants from the Islamic State-backed faction of Boko Haram, the Islamic State West Africa Province (ISWAP), formerly known as Jamā'at Ahl as-Sunnah lid-Da'wah wa'l-Jihād, have caused serious havoc in Borno State.

The terrorists have taken over a military base in Damasak town, Mobbar Local Government Area of Borno State.

Sources told SaharaReporters that the insurgents stormed the community, shooting in all directions before ramming a pick-up truck loaded with explosives into the military base.

A resident said the gunmen came in different groups and could not be counted.

He added that some Nigerian soldiers were killed while others fled into the bush.

“They came, hundreds of them, with guns, trucks, and grenades and started firing from different directions. The soldiers ran away and left us on our own. They didn’t shoot at them (insurgents) at all. Though some soldiers were killed I can’t say how many,” he told SaharaReporters.

‪It was learnt that the insurgents also burnt a Nigerian army tanker and some buildings in the military base.‬

The Nigerian military has repeatedly claimed that the insurgency has been largely defeated and therefore frequently underplays any losses.

Many soldiers and officers have been reportedly killed since January 2021.

At least 33 soldiers were recently killed when two vehicles loaded with explosives rammed into a military convoy in Wulgo.

SaharaReporters gathered that the soldiers were on patrol to clear some Boko Haram elements in the area following credible intelligence when they were ambushed by the group.