A man has been imprisoned by a court in Kano state for trafficking at least 30 women to Libya. 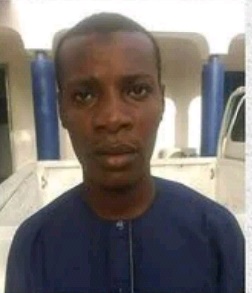 Suleiman
A Nigerian man has been sent to prison by a Federal High Court sitting in Kano.
The man identified as 28-year-old Abubakar Suleiman was sentenced to two years imprisonment without an option of fine for trafficking 30 women to Libya.
In her ruling on Thursday, March 25, the presiding judge, Justice Sa’adatu Ibrahim-Mark, also ordered the convict to pay an additional N250,000, adding that he will serve additional three months in the correctional centre should he fail to pay the said amount.
The National Agency for the Prohibition In Persons (NAPTIP) had charged Suleiman, a resident of Kadawa Miltara Quarters in Ungogo Local Government Area of Kano, with one count of trafficking in persons.
The Prosecution Counsel, Barrister Abdullahi Babale, told the court that the defendant on February 10 conspired with one Salele (a Nigerien) now at large and transferred 30 women from Edo and Lagos State to the Niger Republic through Babura border in Jigawa en route to Libya.
Barrister Babale added that the defendant deducted N5,000 each from the N50,000 paid per person by the sponsors in Libya and the Niger Republic as commission,
He also noted that the offence contravened the provisions of Section 13(2)(c) of the Trafficking in Persons(Prohibition) Enforcement and Administration Act 2015.
The defendant pleaded guilty to the charge. 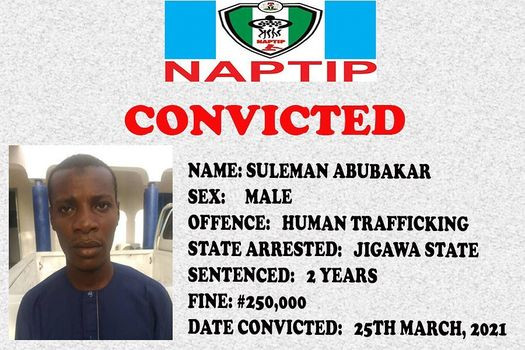 Babale then tendered the defendant’s statement and one of the victim’s statement as an exhibit and urged the court to sentence the defendant according to section 356 (2) of the Administration of Criminal Justice Act 2015.
The Defence Counsel, Barr. M. B. Isa, pleaded for leniency on behalf of his client as a first time offender.
"The defendant is married and has five children. We pray the court to temper justice with mercy according to section 416 (2) of ACJA 2015." the counsel said.
Top Stories