He urged the pilots, engineers and technicians to remain undeterred and resolute in their commitment to ensuring that peace returns to the North-East. 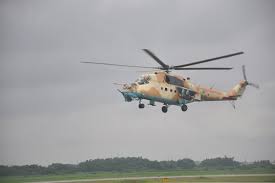 Air Marshal Oladayo Amao, the Chief of the Air Staff, has arrived in Maiduguri, Borno State.

He is in Borno to coordinate the ongoing search and rescue mission for a Nigerian Air Force Alpha Jet which was lost during the Boko Haram combat mission in the North-East.

“The air chief arrived in Maiduguri on Thursday morning, where he was briefed on ongoing search and rescue efforts in connection with the missing Alpha Jet aircraft,” the NAF Director of Public Relations and Information, Air Commodore Edward Gabkwet, stated in an update.

He urged the pilots, engineers and technicians to remain undeterred and resolute in their commitment to ensuring that peace returns to the North-East.

SaharaReporters had reported that the fighter jet went missing on Wednesday around 5pm, amidst fears that it might have been captured or shot down by the Boko Haram terrorists – who are now being aided by a more deadly faction, the Islamic State West African Province fighters.

The NAF also in a release confirmed the missing Alpha Jet, noting that the details of the whereabouts of the aircraft were still sketchy.

“A NAF Alpha-Jet has lost contact with radar in Borno State, while on interdiction mission in support of ground troops. The mission was part of the ongoing counter-insurgency operations in the North-East. The loss of radar contact occurred at about 5:08 pm on 31 March 2021.

“Details of the whereabouts of the aircraft or likely cause of contact loss are still sketchy but will be relayed to the general public as soon as they become clear. Meanwhile, search and rescue efforts are ongoing,” Gabkwet has stated.

The Alpha Jet, a light attack jet and advanced jet trainer aircraft, has played a significant role in Nigeria’s counter-insurgency campaign in the North-East theatre of operation.

It was acquired by NAF in 2014 from the United States of America air force.

It will be recalled that in February 2021, a NAF Beechcraft King Air 350i Surveillance Aircraft crashed in Abuja, the Federal Capital Territory.

The outcome of NAF’s supposed investigation into the crash has yet to be made public.