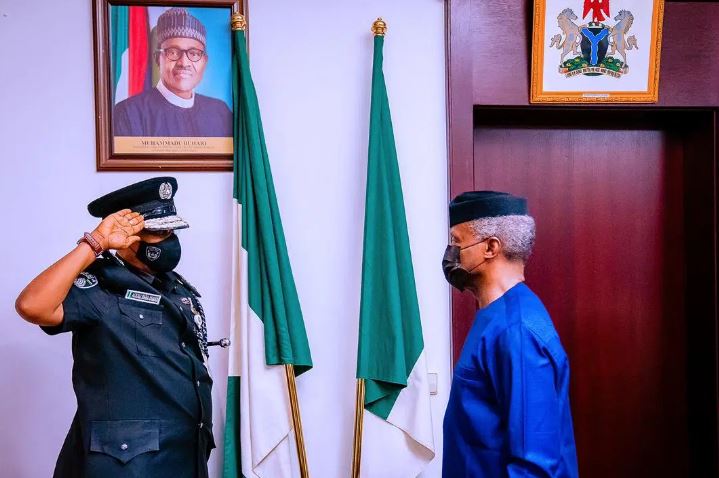 Usman Alkali decorated as Nigeria's new IGP
Nigeria's new acting Inspector-General of Police, Usman Alkali was appointed by President Muhammadu Buhari because he is the most senior among those qualified to hold the position.
Vice President Yemi Osinbajo said this Wednesday in Abuja while decorating Mr Alkali with his new position.
Mr Buhari, who appointed Mr Alkali, is currently in the UK for medical treatment.
“Your selection by Mr President follows a rigorous process where all eligible Deputy Inspectors-General of Police and Assistant Inspectors-General of police were considered. The president then appointed you as the most senior qualified and eligible officer,” Mr Osinbajo said.
Read the full statement by the vice president below.
Let me once again offer my congratulations to you, new Inspector-General of Police on your appointment. Your selection by Mr President follows a rigorous process where all eligible Deputy Inspectors-General of Police and Assistant Inspectors-General of police were considered. The president then appointed you as the most senior qualified and eligible officer.
“This is a departure from the past when the selection of the new Inspector General of Police often meant the immediate retirement of a cohort of senior police officers whose vast experience and training would no longer be available to the country.
“This appointment, which is largely on the basis of seniority and competence, will ensure that you have access to professional and experienced officers to support you in your new role.
“Before I go on, let me thank the outgoing Inspector General of Police. I want to thank you for your services to this nation. And for your innovative work carried on through your years as the Inspector-General of Police; thank you for your services to Nigeria. IG, you are assuming office at a very turbulent time in the life of our people. There are multiple threats to law, order and public safety.
“The role of law enforcement and particularly that of the police force as primary agency charged with maintaining law and order has never been more important. The police is our institution of first resort, the first line of defence against crime and anarchy and the first sign of the strength of the state.
“Last year, Mr President signed the new police act, the first police reform legislation to be enacted in almost 50 years. The Act is the centrepiece of our commitment to reinventing the police as an institution that we can all be proud of. It articulates this administration’s vision of the modern competent police force as an institution committed to the preservation of human rights and human dignity and protection of the public against all criminal threats. The challenges before you are indeed onerous and will test your mettle, the organisation you are leading is one that is itself facing several challenges. Your officers work still in extremely difficult conditions. And some face the threat of physical harm by terrorists, hostile non-state actors while in the line of duty but they have lived up to expectations.
“There is no question at all that there is a lot that needs to be done. There is a lot of work that needs to be done. Under your leadership. The police must now rebuild in some ways also the broken bridges of trust to the public and regain the confidence of the citizenry. This is an ongoing challenge, it is an ongoing task that the police force and all of the senior members of the police force must take on as a responsibility, that of the continual process of building trust with the Nigerian people.
“One of the ways you can do this is by implementing the community policing policy which had already taken off and reconceptualizing policing as a task carried out in partnership with local communities and by officers who are members of these localities. Under your leadership, the force must live up to all of the highest standards of professional conduct and compliance with the rule of law. It must significantly improve the welfare and working conditions of its officers while rapidly scaling up its forensic, logistical, logistical and operational capacities.
“To meet today’s challenges. You must stamp out the excesses and abuses and the culture of impunity, demonstrated by some elements of the force which provoke public outrage against institution. In short, your mission is nothing less than the restoration of dignity and high repute of the policing professional and the continuous oiling of that machinery of the police force that enables it to be one that is respected by the populace and by the international community.
“The testimony of your pedigree and your career thus far is that you are up to the task. The administration stands ready to work with you to reposition the NPF and take it to unprecedented height of professionalism, competence and excellence.
“I, therefore, welcome you as a key partner to this administration’s comprehensive programme of reform aimed at repositioning the Nigeria Police Force as a modern, responsive and citizen-centred law enforcement service. We all expect that you will justify the confidence that Mr President has reposed in you, enable you to lead the force in these times. I congratulate you once more on behalf of Mr President, and his cabinet. I wish you all the very best in your tenure. Thank you.”
Top Stories