Speaking, Chairman, Rivers State Civil Society Organisations, Enefea Georgewill expressed sadness over the action of the state government in withholding the teachers’ salaries for up to five years. 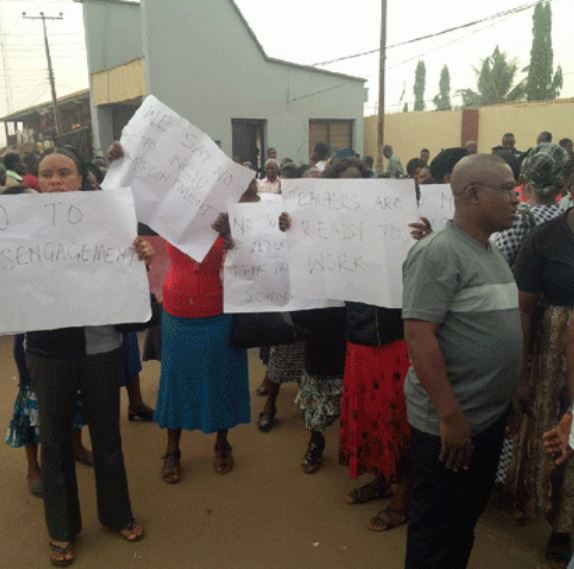 File photo used only to illustrate the story

According to Vanguard, some government primary and secondary school teachers in Rivers State, yesterday, protested non-payment of their five years salaries by the state government.

The protesters, who took over the entrance of the Rivers State Government House with placards bearing different inscriptions such as “Government is not a personal thing”, “Our teachers deserve better treatment, pay them their salaries”, “God is against injustice, please pay our teachers’ salaries”, “Wike ease our pain and save our education sector,” were joined by their former students, family members and members of civil society organisations.

Speaking, Chairman, Rivers State Civil Society Organisations, Enefea Georgewill expressed sadness over the action of the state government in withholding the teachers’ salaries for up to five years.

Georgewill appealed to the governor to come to the teachers’ aid who he said have been experiencing severe hardship and unable to cater for their families, reminding the governor that he was a beneficiary of teachers training.

He said: “We condemn in the strongest terms the attitude of the governor towards the teachers.

How can the governor, Nyesom Wike donated N500 million to the Sokoto State government over a fire incident that engulfed a market, whereas teachers in his state are being owed five-year arrears of salaries.

“It is unfortunate we are in a country where people don’t appreciate peace. Violators are those rather placed on payrolls, and pay them every month, while nobody cares about the law-abiding ones.

“More than 26 teachers have died so far, over non-payment of their salaries, the governor should comply with the court order and pay us.”

However, at press time, no official of government had addressed the protesting teachers.