The disturbing video was captured on a CCTV camera in the southern city of Almaty, Kazakhstan on Wednesday, April 21. 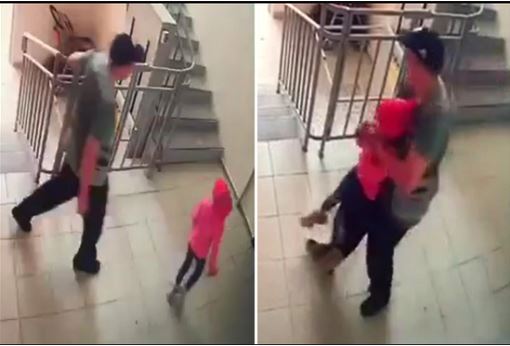 The man carried the girl away

In what will come across as a really shocking development, a CCTV footage captured the horrifying moment a suspected paedophile carried a 7-year-old girl out of her apartment block before assaulting her.

The disturbing video was captured on a CCTV camera in the southern city of Almaty, Kazakhstan on Wednesday, April 21.

The clip shows a girl, dressed in a pink winter jacket, entering her apartment block from a street while being followed by a man in a grey T-shirt and a black cap.

As the child rushes up the stairs, the man takes a second to look up to make sure there no one is around before rushing after the girl. They go out of sight for a while before the man appears again, carrying the child down the stairs to a place equipped with surveillance cameras.

After dragging the girl into the corner, the pervert 'undressed her and touched', police said.

It was also reported that the child later escaped from the abuser and alarmed her parents who immediately called the police.

Lieutenant colonel Rustam Abdrakhmanov, the deputy chief of Almaty city police, told reporters: ''The man dragged the girl to a spot which is not observed by CCTV cameras. There he undressed her and started touching and groping her.

'The victim managed to escape and report the incident to her mother. The perpetrator was caught within ten minutes.'

According to police reports, the suspect who lives nearby noticed the girl in a supermarket.

He realised she was on her own and followed her, detectives said.

Criminal charges have reportedly been brought against the man who, if found guilty, faces up to 15 years in prison.