UFC champion, Kamaru Usman has bragged that he's the best fighter in the world following his recent win. 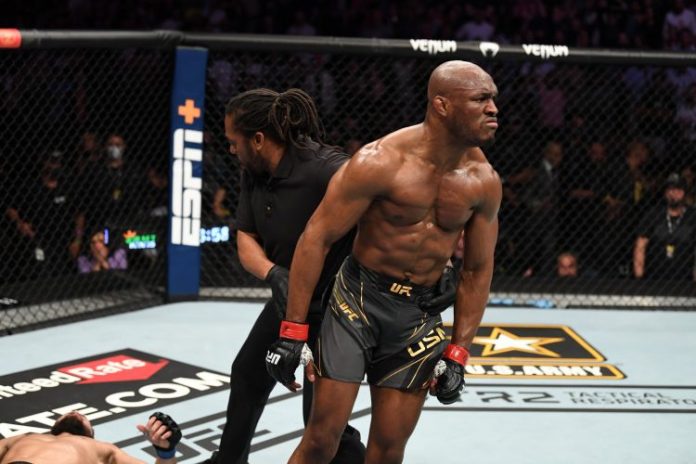 UFC champion, Kamaru Usman
Nigerian fighter and UFC champion, Kamaru Usman is having the best time of his life.
The champion has declared he is the best fighter in the world, after beating Jorge Masvidal at UFC 261.
The fighter said this in his post-match press conference.
He was asked for his reaction to President of the UFC’s Dana White comment that he (kamaru) is one of the best fighters in the world and on his way to becoming one of the greatest.
Kamaru said White understood what he has set out to do.
“He is understanding what I set out to do. I had big goals for myself and I want to see it out truly”, Kamaru said.
The fighter scored a stunning second-round knockout to finish Jorge Masvidal and retain the undisputed UFC welterweight title at UFC 261 in Florida today, Sunday.
The match was a rematch of their meeting at UFC 251, where Masvidal stepped in on six days’ notice but lost out to Usman on the scorecards after five rounds.
Masvidal in his reaction to the defeat said: “First time in my career, and it’s in front of all my people, my family and my friends, so it hurts.
“I’ve never been knocked out in 50 pro fights. Usman showed me something that he didn’t show in the first fight. I didn’t feel his power, and that’s what happens when you get over-confident. I thought we were going to wrestle more.
“All the props to him in the world. He caught me by surprise. He’s got my number. There’s nothing I can say. He won this fair and square. God bless him.”
Top Stories