Niger state Governor, Abubakar Sani Bello has cried out that Boko Haram terrorists have taken over his state. 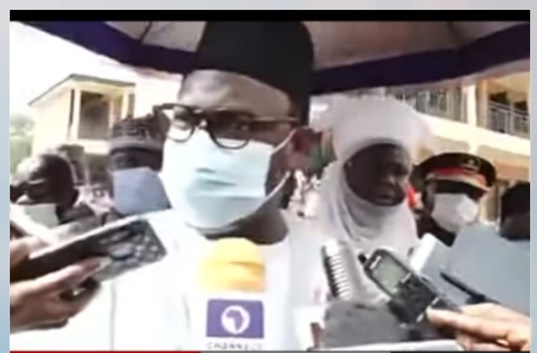 Niger Governor, Abubakar Sani Bello
Boko Haram terrorists have taken over some parts of Niger state.
The Niger Governor, Abubakar Sani Bello confirmed this while crying out for help.
According to him, the terrorists hoisted its flags in Kaure and Shiroro local government areas of the state, chased residents away and forcefully took the wives belonging to men of the area.
The North-central state is about 140km to the Federal Capital Territory, Nigeria’s seat of power.
Governor Abubakar Sani Bello, who confirmed this on Monday, said the terrorists have displaced over 3,000 residents of the affected communities.
“I am confirming that there are Boko Haram elements here in Niger state, here in Kaure, I am confirming that they have hoisted their flags here.
“Their wives (of the villagers) have been seized from them and forcefully attached to Boko Haram members. I just heard that they have placed their flags at Kaure, meaning they have taken over the territory.”
Mr Bello further said he had earlier alerted the federal government but it (government) has not been proactive.
”This is what I have been engaging the federal government on, unfortunately it has now got to this level. If care is not taken, even Abuja is not safe. We have been saying this for long. All our efforts have been in vain.”
Mr Bello said he hoped for a more coordinated military activity to fight the terrorists.
“Sambisa is several kilometers from Abuja but Kaure is less than two hours drive from Abuja. So nobody is safe anymore, not even those in Abuja.”
“This is the time to act. All hands must be on deck. It is not a fight for Niger State alone. I am not waiting for anyone anymore, I am going to take action,” he said.
Nigeria has been battling Boko Haram insurgency in the North-east for over a decade with recurring attacks in many parts of the country.
In the last seven years, despite the federal government’s claim that the sect had been ‘degraded’, the country has lost hundreds of lives to the unending insurgency while millions have been displaced and rendered homeless.
Watch video below:
Top Stories