Reacting to the accusation, Mbaka admitted that he led three security experts to the President to proffer solutions to the insecurity ravaging the country. 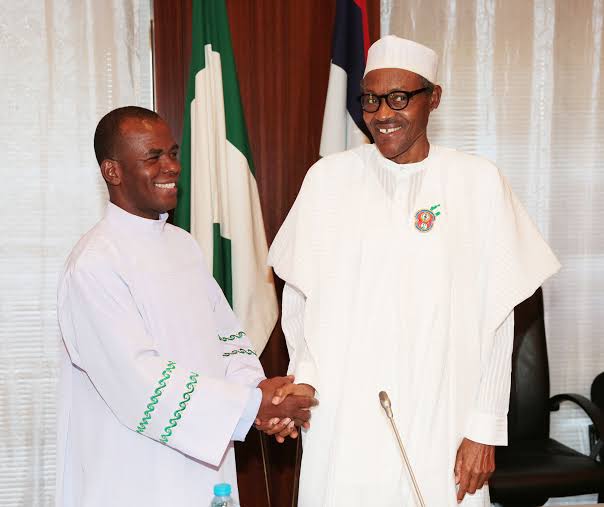 Catholic priest, Fr. Ejike Mbaka has opened up on leading three men to President Muhammadu Buhari for contracts during his first term.

Mbaka stated this in reaction to the accusation by the Presidency that he called for the resignation of Buhari because of the General’s refusal to grant his contract request.

Mbaka, who supported the President during the 2015 and 2019 elections, had on Wednesday during his midweek ministration made a U-turn, asking Buhari to resign or be impeached for not doing enough to tackle widespread insecurity in the country.

But the Presidency opened a can of worms thereafter, saying Mbaka has suddenly become a critic because Buhari refused to offer contracts to his allies.

Reacting to the accusation, Mbaka admitted that he led three security experts to the President to proffer solutions to the insecurity ravaging the country even as he said that those people were not known to him.

The cleric said, “Yes, I led three security experts to the Presidency who offered to help salvage the security situation in Nigeria.

“I don’t know them, but they came to Enugu and pleaded for me to link them to government because of the level of insecurity and how Nigeria has been moving oil outside the country. These are the three people they rejected their offer.”

He further said, “I am happy that the truth was hitting them. We are not afraid of them. Buhari cannot do it again; health and age are not on his side. We need a stronger and an experienced goalkeeper in a time like this. If they want to put it that it was because of contract, let them come and build the highest university here and begin to mess up, I will still speak.”