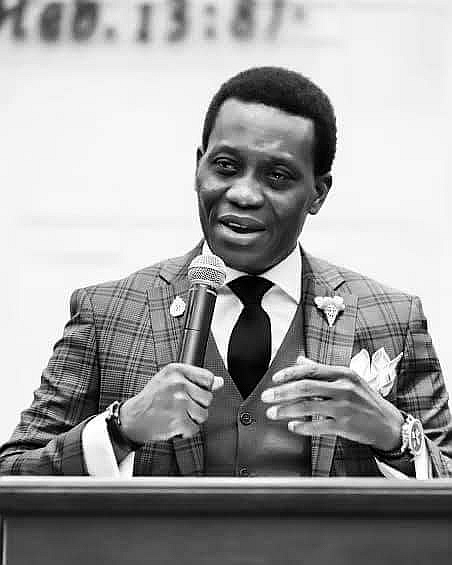 Pastor Dare
It has been revealed that following the death of Pastor Dare Adeboye, the late son of the General Overseer of the Redeemed Christian Church of God (RCCG), Pastor Enoch Adeboye, pastors of the church prayed for hours trying to revive him.
SaharaReporters learnt from top pastors in the church that the inability of the family to trace any known ailment to him or any pre-existing health condition intensified the tempo of prayers directed to God to revive him by some of the pastors, who believed he might have “been spiritually attacked.”
The church which announced the death on Thursday, May 6, had also confirmed that the pastor’s death was not due to COVID-19 infection, adding that “he was in good health before he went to bed and died in his sleep.”
The deceased, who was the Assistant Pastor in charge of Region (Youth) 35, still conducted a church programme last Tuesday, the day he died.
“He was an energetic man of God. He was hale and hearty with no known health condition. Tuesday was for Bible Study and he attended. So, when the wife raised the alarm that he was not waking from his sleep, top RCCG pastors and prayer warriors gathered in their house and started praying. It lasted for hours,” a source said.
“Prayer sessions also began at the Redemption Camp on the Lagos-Ibadan Expressway where the news had filtered only among the senior pastors that Dare did not wake from his sleep. They also started an intensive prayer session. If it was indeed a spiritual attack, Dare would have woken up from the corporate anointing which prayed for him. I believed God himself took him away,” another source stated.
Dare, the third child of Pastor Adeboye, was reported to have died in his sleep on Tuesday in Eket, Akwa Ibom State, where he was based with his wife and three children.
It was reported that after he did not wake up as usual, his wife went to check on him and found out that he had passed on.
A statement on RCCG’s official Twitter account, signed by the church’s public relations unit, had confirmed the news, apparently after long hours of prayer and confirmation that he had died.
“It is with a deep and heartfelt sense of loss we announce the departure of our beloved son, brother, husband and father, Oluwadamilare Temitayo Adeboye, who went to be with the Lord on the 4th of May, 2021,” RCCG public relations department said in a statement.
“Though shaken, our anchor remains Jesus Christ in whom we have the assurance that we will one day meet in a place where there is no pain,” RCCG said.
“It is the wish of the family to be left alone at this moment, and we pray the Lord keep you as you honour this humble request.”
SaharaReporters had reported on Saturday that the General Overseer of the church, Pastor Adeboye, last Friday night broke his silence after the demise of his son.
Adeboye, who preached at the May 2021 edition of the church’s Holy Ghost service, urged everyone to always thank God and say ‘It is well’ even in the face of crises rather than ‘blame and question God’.
He had said, “Whatever we have is given to us by God, be it wealth, wife, husband, children, etc. and if it got taken away by God, all we can do is give God glory for actually giving us the privilege to enjoy those wealth or kids temporarily and it is not for us to complain, blame and question God.
“What we see as sorrows might be joy in the sight of God; I mean His ways and thoughts are not the same with ours, we shouldn’t forget that both good and bad happen at God’s command. (Lamentations 3:38).
“Finally in all things, let’s learn to say thank you father and It is well. God bless all of you in Jesus’ name.”
The RCCG overseer had further stated that peace is one of the blessings only God can give, saying, “There is a peace that passes human understanding. It is only God that can give that peace. I thank God that I have that peace.”
Top Stories