Nigerian legendary musician, Sound Sultan has said at the right time he will tell his story. 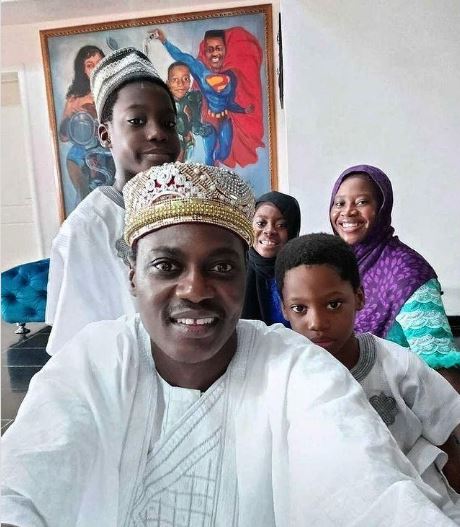 Sound Sultan and his family
Olanrewaju Fasasi aka Sound Sultan has posted a beautiful family photo as he joined other Muslims to celebrate Eid al fitr.
The musician also debunked the fake news that was shared widely on Wednesday, claiming he was ill with throat cancer.
The 44 year-old musician in a post on Instagram Thursday wished muslim brothers and sisters
Then he addressed the fake news, by thanking fans for the “massive” show of love, adding, “I will tell you my story myself it will be true THEN not false”.
Meanwhile, the singer’s senior brother Baba Dee has debunked reports that Sound Sultan has throat cancer.
Baba Dee, also a singer, expressed surprise at the news, although he confirmed that Sound Sultan was ill.
“He is sick and he is getting better in New York. But throat cancer. Na lie,” the man born Dare Fasasi wrote in the message published by QEDng.
Multiple media reports on Wednesday, May 12th, said Sound Sultan was diagnosed with throat cancer and undergoing chemotherapy in the US.