Liverpool manager Jurgen Klopp took to the media to play down his row with Sadio Mane after the team's victory against Manchester United, claiming he is not worried about the matter. 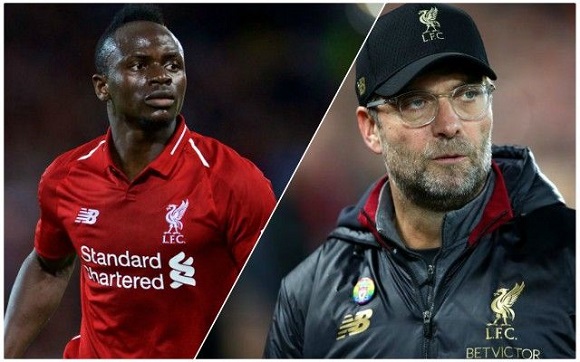 Mane was spotted snubbing off Klopp's attempt in handshaking the winger after their 4-1 win against the Red Devils on Thursday at Old Trafford.

The 29-year-old winger seems to have been disappointed not to have started the game, as Diogo Jota, Mo Salah and Roberto Firmino were preferably used in the starting eleven by Klopp. The three players proved their worth as they were pivotal in Liverpool's victory which sparked their hope of Champions League qualification, and with Bet9ja promotion code football fans will be looking forward to bag winnings for the remaining fixtures of the season.

Right after the game, the German coach claimed that there was no problem between him and Mane, and the issue was that he didn't have the time to explain to the Senegal international his decision to start Jota ahead of the winger. During the press conference ahead of their Premier League game against West Bromwich Albion, the Reds manager brushed off all rumours of a rift.

Speaking at the press conference, Klopp said: “I cannot make a bigger story of it as it is. Football is an emotional game and everyone expects from us to control our emotions always. It doesn't work out always, that's the case.

"It happened to me as a player, it happened to other players when I was their coach. We had so far no real chance to talk about it but we will and there will be nothing left. Everything will be fine.
"Do you want these things to happen? No. But it's not the first time in my life and I'm afraid to say it won't be the last time."
He continued: “The thing is, if somebody shows me respect five million times, and one time not, what is more important?

“The world is in this situation where you [the media] make this one time bigger than necessary. That is unfortunately the case, and I hope for you that your boss will not forget, if one time you don’t show him respect, all the other stuff. Even now, I can see the headlines you will make.
“I am completely relaxed about it. If you’d have seen me as a player, what I did out of emotion, it was insane! I’m a completely normal guy, but it happened to me. “Nothing else. We will talk about and it will be sorted. That’s all.”

Liverpool will have to travel to The Hawthorns stadium on weekend for their game against West Brom, and taking all three points will give them a chance in the Premier League top four.

Securing three victories in their remaining three fixtures, away to West Brom and Burnley, and against Crystal Palace at Anfield. Doing that could earn them a place in the top four while either Leicester City or Chelsea will be exiled from the top four spots this season. Leicester City and Chelsea will face off at Stamford Bridge on Tuesday for a league match and regardless of the outcome, gaining all three wins will help Liverpool stand a chance at securing a chance for Champions League qualification.

Leicester will be facing Tottenham Hotspur at the King Power Stadium while Chelsea will be pitted against Aston Villa at the Villa Park for their final Premier League match of the season.