These ladies, hopeful of better life outside Nigeria, travel by land through Katsina State, Niger Republic and through the scotching heat of the Sahara Desert, landing in Tripoli, the capital of Libya. 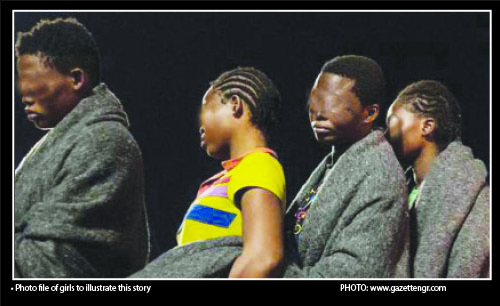 The story has been told of young Nigerian ladies who were intercepted in Jigawa while making their ways to Libya.

Over the years, traffickers have developed a knack for traveling outside the shores of the country in search of a greener pastures that often turns out to be a mirage. Despite the obvious harm that eventually ends their stories, hordes of young Nigerian ladies risk it all just to make these trips, which they hope would end their pact with poverty and want.

These ladies, hopeful of better life outside Nigeria, travel by land through Katsina State, Niger Republic and through the scotching heat of the Sahara Desert, landing in Tripoli, the capital of Libya. From there, in most cases, they make further leap through the sea to the shores of Europe.

A few days ago, seven of these ladies, landed in Jigawa State. They were, however, unlucky. Operatives of the Nigerian Immigration Service (NIS), arrested them at Gurai village in Babura Local Government.  They had assembled in the village from different places en-route Libya through Niger Republic.

NIS state Controller, Ismail Abba Aliyu, who paraded the ladies, expressed grief at the prevalence of trans-Sahara human trafficking business. He regretted that the ladies were perhaps going to engage in prostitution in a foreign land.

The ladies, ages between 16 and 27 years, came from Ogun, Lagos, Kwara, Imo and Oyo states. He said two of the arrested ladies came from Ogun, one from Lagos, two from Imo, one from Oyo and another from Kwara states.

Some of these ladies, he stated, had incomplete traveling papers: “They came through Kano State and were communicating with their contact, who had completed arrangements for their movement to their intended destination.”

Aliyu disclosed that only two of them possessed valid but blank traveling green passports. Another had an ECOWAS traveling passport “even though her desired destination was not within the ECOWAS region.

“They revealed that they had already made significant arrangements with a contact who had appointed a driver to convey them to Niger Republic. Their arrest was not without a drama. Our officers chased the girls into the bush to effect arrest while their driver abandoned the vehicle and fled.”

These ladies have stories to tell. Bilkisu, 26, is from Lagos State. She holds an Ordinary National Diploma (OND) in Business Management. She confessed to Daily Sun:

“I have been trying so hard to get a job to fend for my aged mother and my younger siblings. But my efforts were to no avail. I was advised to travel to Libya where I would get better means of livelihood.”

Her plan was to get enough money when she got to Libya. That would enable her set-up a decent business in Nigeria.

Another trafficked victim is 16-year-old Zainab from Lagos State. She confessed that she was lured by a relative to embark on the trip to make fortunes.

Chidinma, 17, from Imo State, was also arrested. She said she was rather deceived into embarking on the trip where she was promised to head to Europe for an undisclosed work.

The Comptroller General of NIS, Daily Sun learnt, directed that the victims of trafficking be handed over to the National Agency for Prohibition of Trafficking in Person (NAPTIP) in Kano.

The police had on March 31, 2021, rescued three women in the same Babura axis. They were suspected to have come from Plateau State.