Shocking! Deserted Trailer Found Intact After 11 years; Villagers Claim An Invisible Hand Slaps Those That Try To Steal Its Parts


Villagers and traditional leaders revealed that the trailer has remained relatively intact because everyone who attempted to take its remaining parts has been slapped by invisible “guards”. 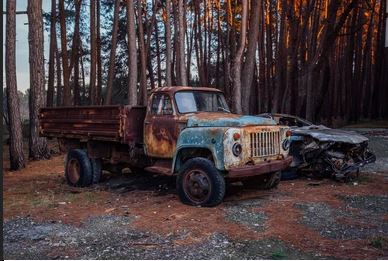 A trailer that was deserted for 11 years has been found intact as the owner devised a means to keep it safe from robbers.

Sunday News reported that though thieves were only able to remove some parts of the trailer like its tyres, villagers claim that whatever is left of the trailer abandoned at Dopota, Hwange along the Bulawayo-Victoria Falls highway, Zimbabwe, cannot be touched as an invisible hand slaps anyone who tries to do such.

It was gathered that the trailer was abandoned in 2010 by a driver who was ferrying coal from Hwange to Harare after it broke down. Although the trailer load was later offloaded into another truck, the owner has not bothered to tow the trailer.

Villagers and traditional leaders told the publication that the trailer has remained relatively intact because everyone who attempted to take its remaining parts has been slapped by invisible “guards”.

A villager, Samuel Mugande said for some strange reason, the mystical creatures guarding the trailer only attack those who attempt to steal.

“The most interesting part about these incidences is that those that are mostly attacked are those individuals trying to steal from the trailer. People, especially truck drivers, are the culprits that are often attacked by these things when stop and try to steal wheels."

It is alleged that the incidents started happening a few months after a villager who was left in charge of the trailer when it broke down, told its owner that people were trying to steal its tyres and boards.

The owner reportedly came to Dopota village and afterwards told her not to worry anymore. That was the time when reports of people being assaulted by unknown beings began to surface.