Nigerian lawyer, Femi Falana has protested in Lagos alongside his son, musician Falz. 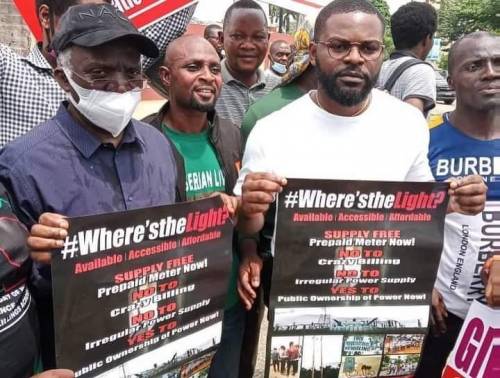 Falz and his father protest in Lagos
Nigerian musician, Folarin Falana aka Falz has joined his father, Femi Falana and others to protest in Lagos.
The activists took to the streets of Lagos to protest against the rising insecurity and poverty wreaking havoc in the country.
The protesters, under the aegis of the Peoples Alternative Political Movement, marched from Ikeja Bus Stop to the Governor’s Office through the Secretariat to the Lagos State House of Assembly, chanting protest songs.
The movement is a coalition of groups including the Nigeria Labour Congress and its affiliates, the Alliance On Surviving COVID 19 And Beyond; Joint Action Front; Coalition Of Northern Groups; Green Alliance Nigeria; CONGOS – Edo; North East Development Association and their respective affiliates.
The demonstration, which was tagged, ‘Enough is Enough’, lasted for several hours as youths carried placards with inscriptions such as, ‘No to Exploitation and Multiple Taxation’, ‘Provide Jobs or Unemployment Benefits for Youths’, ‘Provide Security in Schools’, ‘End Kidnapping and Banditry’ and ‘Stop Killings, Secure Nigeria’.
The protesters, which included trade unions, civil society, students, farmers, and peasants, were led by a foremost activist, Jaye Gaskiya.
Gaskiya said the protest was organised to express displeasure over how badly the country had degenerated.
He expressed worry that Nigeria, characterised by extreme poverty, arms proliferation, religious intolerance, the rise of hate, and ethnic nationalism is moving towards social upheavals due to exploitation of the people, greed, and avarice of a spineless political class that has reached its wit’s end.
A statement issued by the movement captured seven key demands which include the immediate convening of the Nigeria Police Council to discuss the security challenges and an end to the arbitrary sacking of workers.
It stated, “We reject any plans to further hike energy costs – in the price of fuel and electricity tariff; as these costs are not only already at unbearable levels, but also because these price hikes are the major cause of rising and unbearable costs of living, expressed in rising inflation.” 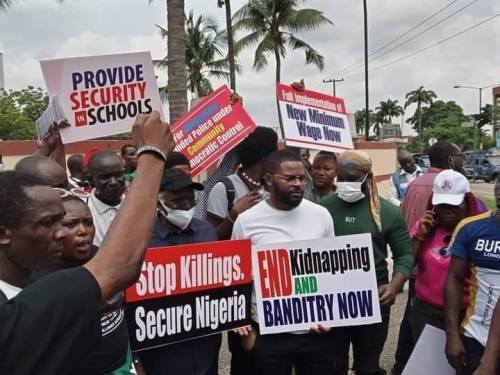