It was learnt that Olorunfemi and Muhammed were the tools the state Deputy Governor, Edward Onoja, used to keep the protesters in detention for about two months. 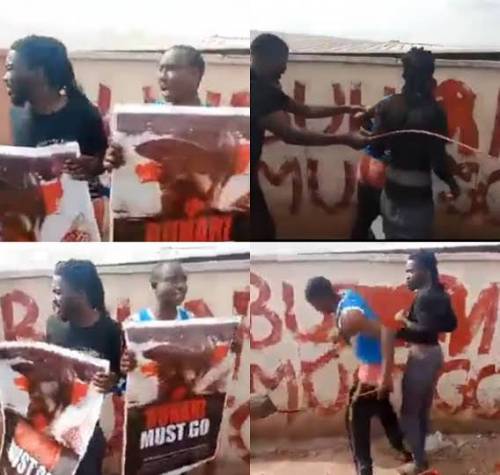 Justice Richard Olorunfemi, the Kogi State Acting Chief Judge,  and the Chairman of the Kogi State branch of the Magistrates Association of Nigeria, Dr Tanko Muhammed were the ones who arranged a kangaroo trial for two Buhari-must-protesters, Larry Emmanuel and Victor Udoka, who have been detained by the Kogi State Government since April 5, according to SaharaReporters.

SaharaReporters learnt that Olorunfemi and Muhammed were the tools the state Deputy Governor, Edward Onoja, used to keep the protesters in detention for about two months.

Despite the ongoing strike by the Judiciary Staff Union of Nigeria, the State power-drunk officials secretly arraigned Emmanuel and Udoka and remanded them.

“Olorunfemi gave him the assignment. This was after Onoja informed him to arrange the Magistrate to jail the anti-Buhari protesters. The Commissioner of Police was also part of the conspiracy,” a source revealed.

SaharaReporters had on May 5 reported that Nigerians held a protest march in the Federal Capital Territory, Abuja, to demand the release of two Buhari-must-go protesters.

The protesters, while condemning the continued detention of the duo, demanded that the Federal Government must wade in and get the innocent citizens released.

They carried protest banners, with inscriptions such as, “Yahaya Bello, Where is Emmanuel Larry?.”

The two protesters, who were arrested, molested by thugs sponsored by the Kogi State Government and detained by the police, had also fallen critically sick.

SaharaReporters learnt that the two protesters had also been denied medical treatment.

“They are seriously ill and not getting treatment. The state government is hell bent on keeping them, perhaps until they die in custody?” a source had stated.

A month ago, global human rights' organisation, Amnesty International, had demanded the unconditional release of the two Buhari-must-go protesters, adding that the protesters' only crime was that they were “peacefully protesting against corruption and distributing posters that were perceived to be critical of the President.”

Amnesty International said that the activists “were physically assaulted and tortured by unidentified men while peacefully protesting against corruption, and the poor human rights situation in Nigeria, and distributing posters that were perceived to be critical of the President."

“A few days later, they were turned over to the police and were subsequently transferred to the Nigeria Correctional Centre, located in Kogi State, in north central Nigeria, where they are currently being held.

“The two activists are being detained solely for peacefully exercising their right to protest and expressing their views. They must be immediately and unconditionally released,” AI statement partly read on Monday.

SaharaReporters had reported on April 8, that the Kogi State Police Command continued in its deliberate harassment and intimidation of Emmanuel and Udoka by charging them for treasonable felony and public disturbance.

SaharaReporters had learnt that the duo were not brought to court because of the JUSUN strike, but were tried in a Magistrate’s office and remanded in the Kabba prison.

The power-drunk magistrate, it was further gathered, gave no adjourned date for the matter.

The police had secretly arraigned the two protesters and ensured that they were remanded at the Kabba Prison – without the knowledge of their lawyers or family members.

SaharaReporters had learnt that neither the charges on which they were arraigned were made to the public or the Magistrate where they were tried.

The police authorities backed by the Kogi State government have continued in their desperate attempts to frustrate the two protesters.

This is sequel to the torture meted out to the protesters who were only pasting Buhari-Must-Go posters in Lokoja, the Kogi State capital.

SaharaReporters had reported that the irate mob flogged the two youths, filmed them and brutalised them before they were later handed over to the police.