Armed bandits stormed the school riding in motorcycles and abducted the pupils, some of them who were under four years, on Sunday, May 27. Three teachers were also abducted. 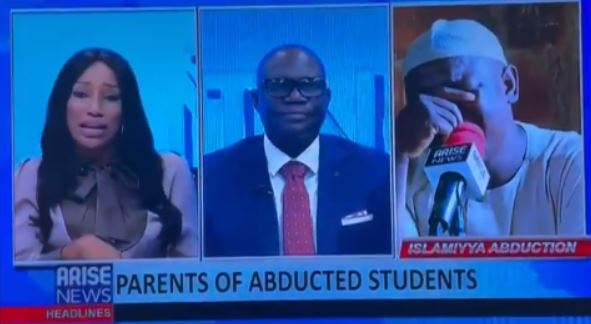 The parents of the abducted 136 pupils of the Salihu Tanko Islamiyya school in Tegina town, Rafi LGA, in Niger state have spoken up.

They accused the state government of abandoning them just as they say the bandits have raised the ransom for their release from N120 million to N200 million.

Armed bandits stormed the school riding in motorcycles and abducted the pupils, some of them who were under four years, on Sunday, May 27. Three teachers were also abducted.

In an emotional-laden interview on AriseTV today, June 4, the headteacher of the school, Abubakar Alhassan, whose child was also abducted alongside his sister, broke down in tears as he accused the state government officials of not contacting the state government of neglecting them or even showing sympathy to them.

All eyes are on me as the head teacher. I have witnessed the funeral prayers of one of the parents very close to the school. She had just one child in the school.

She wasn't around when the incident happened. When she came back, they told her that this is what is happening. Before you know, within 10-15 minutes, she fainted and that was the end of her, she died. That was the day before yesterday.

One day after the incident happened, another parent, a woman, died from heart attack.

Another parent of one of the abducted students, Tanko Zagi,  said they are yet to hear from the state government

The state government on Wednesday said it was doing everything possible to ensure the safe return of the students.

Watch the video clip from the interview below: