The protest followed the killing of 88 persons by bandits in Danko-Wasagu Local Government Area of the state on Thursday. 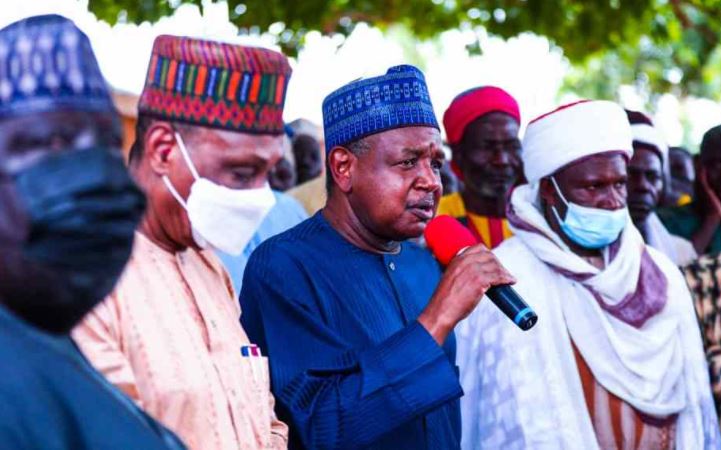 Governor Atiku Bagudu of Kebbi State in the affected communities

According to PREMIUM TIMES, no less than two persons were reportedly shot and injured on Saturday after residents of a community, recently attacked by bandits, blocked the convoy of Governor Atiku Bagudu of Kebbi State while protesting against insecurity in the state.

The protest followed the killing of 88 persons by bandits in Danko-Wasagu Local Government Area of the state on Thursday.

Residents said a vehicle attached to the governor’s convoy was burnt by the protesters after shots fired by security agents to disperse the crowd hit two persons. The two men were said to be receiving treatment in an undisclosed hospital in the state.

Mr Bagudu was in the council area on Saturday to condole with the people over the killings. However, some residents burnt used tyres on the streets, booed the governor and attacked his convoy over his alleged poor handling of security challenges in the areas.

The Emir of Zuru, Muhammadu Sani-Sami, who confirmed the incident in an interview with BBC Hausa Service, said the governor was in the area to sympathise with the residents, following the bandits’ attack, when the incident happened.

The governor usually visits and sympathise with residents whenever such things happened and promised to bring an end to such attacks but they keep on reoccurring, the emir said.

“But the youth this time came out en masse and showed their grievances, maybe because they did not see any change, despite the repeated promise to stop the attacks,” the traditional ruler said.

Mr Sani-Sami, however, said the governments was doing its best to forestall the attacks but noted that security agents in the area do not have the numbers to stop the bandits.

Speaking on Saturday when he paid a condolence visit to the affected communities, the governor regretted the nefarious acts of banditry in the area.

“It is really unfortunate that these obnoxious and deadly attacks occurred after the area had been quiet and peaceful.

“We should not allow this vicious cycle to continue, as such, all hands must be on deck to provide plausible solutions to the problem,” Mr Sarki quoted his governor saying in the statement.

The governor also admonished the people to regard the tragic incident as an act of the Almighty Allah and urged the residents to pray for God’s intervention.

The governor also urged vigilante groups in the area to collaborate with the security agencies, traditional rulers and the various communities, to ensure the success of their activities.

In his remark, the village head of Gaya, one of the attacked communities, Ahmad Ubandoma, narrated how the attacks happened and urged the governor to facilitate the deployment of more security personnel in the area.

PREMIUM TIMES reported how 88 people were killed by bandits in attacks on some communities in Danko-Wasagu Local Government Area.

Some of the affected communities are Koro, Kimpi, Gaya, Dimi, Zutu, Rafin Gora and Iguenge, all of which are described as difficult to access from Kebbi State.

Passing blames not the solution – Governor

The governor, following the incidents, urged residents to be optimistic about the security situation in their area. He said passing blame will not solve the problems and pledged to take more pungent measures against the bandits.

“We should note that passing blame will not solve the problem. What is required (is) mutual trust and respect for all,” the governor’s spokesperson, Yahaya Sarki, said in a statement.

Mr Sarki was, however, silent on the violent protest in the affected areas.