The spokesman for the Traffic Compliance and Enforcement Corps, Mr Babatunde Akinbiyi, confirmed the accident. 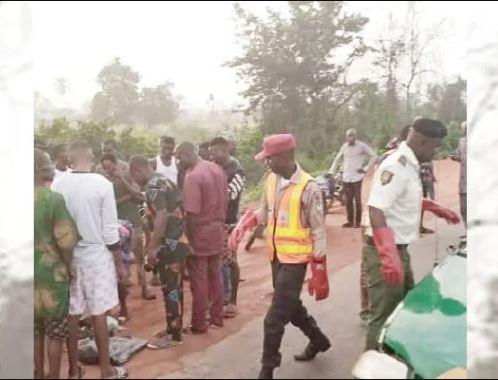 No less than two persons have lost their lives in an Ogun accident, The PUNCH reports.

The two died, while three others sustained varying degrees of injury on Monday in a crash involving a Nissan Sentra car and a Mack truck at Adedero village on the Abeokuta-Sagamu Expressway.

The spokesman for the Traffic Compliance and Enforcement Corps, Mr Babatunde Akinbiyi, confirmed the accident.

Akinbiyi explained that the crash occurred around 5.45am, adding that it was caused by reckless driving on the part of the Nissan Sentra driver.

He said, “According to investigation carried out by the TRACE corps rescue team, the driver of the car picked passengers from Kobape inbound Abeokuta before the vehicle ran into a broken down  truck at Adedero village as a result of reckless driving and poor visibility.

“The injured victims were rescued before TRACE corps personnel arrived at the scene, while the combined team of TRACE, the FRSC and the police took the dead victims in the FRSC patrol vehicle to the morgue of the State Hospital, Ijaiye, Abeokuta.

“The money has been handed over to the families of the victims.

“We learnt that they were fish sellers going to Abeokuta to buy fish before the unfortunate accident happened.”

He commiserated with the families of the victims, while advising drivers to always remove their vehicles from the road in case of a breakdown.