Ohanaeze Ndigbo Worldwide stated this on Thursday after Buhari's interview with Arise TV. 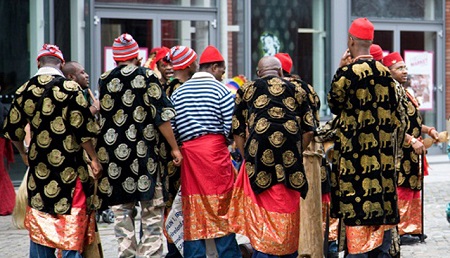 Ndigbo
President Muhammadu Buhari has been told that the ball is in his court to choose between dialogue or war with people of the South East.
Ohanaeze Ndigbo Worldwide stated this on Thursday after Buhari's interview with Arise TV.
Buhari had promised to send the military, police and other security agents after the Indigenous People of Biafra.
According to him, “In any case, we said we will talk to them in the language they will understand. We will organise the police and the army to pursue them; that’s what we can do and we will do it.”
Ohanaeze, in a statement by its national publicity secretary, Alex Ogbonnia, also recalled that on June 1, 2021, while addressing the chairman of the Independent National Electoral Commission (INEC), in the Villa, President Buhari “vowed to shock those bent on destroying” his government.
Ohanaeze, while reiterating its stance in adopting dialogue to Nigeria’s current insecurity, quoted its president-general, Ambassador George Obiozor, on June 4, calling for a ‘dialogue to resolve the present national crises’.
It further said: “With the present level of violence in Nigeria, Nigeria has arrived at a critical juncture. Both history and literature show that the decision taken by a leader at a critical juncture has a lasting effect for the society.
“President Buhari has a choice between Dialogue on one hand and an avoidable War against the Igbo on the other. Again, history shows that our thoughts are very infinitesimal to the immutable Law of the Universe.”
The group accused Buhari of marginalizing Igbos.
It accused Buhari of “Deliberate posting of northern military and police officers at the various strategic locations in the Southeast; special national security council meeting, where major decisions were taken for the South East and the South South to the utter exclusion of security personnel from the South East.
“Launching of the Operation Restore Peace in the South East and South South; shoot on sight order by the inspector general of police targeted at the Igbo youths. And the shock Twit where Mr President stated that ‘those of us in the fields for 30 months, who went through the war, will treat them in the language they understand.”
The statement added: “Ohanaeze Ndigbo has cautioned that the unprecedented lopsidedness of the Nigerian government in favour of the Fulani, to the exclusion of other ethnic groups, especially in the security architecture, will rather exacerbate the internal security challenges in the country.
“Ohanaeze Ndigbo believes that the agitation by the Igbo youth over marginalization is justified. In spite of the orchestrated alienation of the Igbo, we are committed to a diplomatic approach towards a restructured Nigeria that guarantees equity, fairness and rule of law.”
Top Stories