The landlord has filed a petition to the Nigerian Bar Association, NBA, asking it to investigate and sanction the lawyer for what he called unlawful conduct. 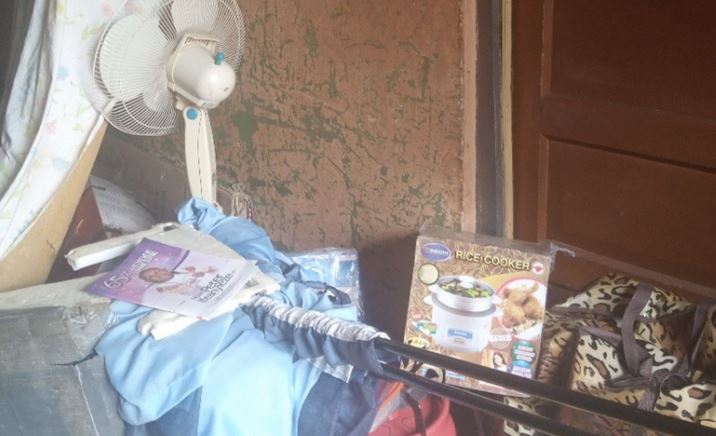 A landlord has cried out after armed thugs stormed his residence located at 12 Ekwueme Street in Uwani, Enugu South Local Government Area of Enugu State at midnight amid heavy downpour and threw away his belongings.

The thugs were alleged to have been deployed by a former lawyer, Ogochukwu Victor-Okoye, engaged by the landlord of the house, Mr. Francis Obiakor.

Bewildered, Obiakor told journalists that he was shocked when his tenants called him on phone and reported that armed thugs sent by the lawyer ejected them from the apartment.

The landlord said he had filed a petition to the Nigerian Bar Association, NBA, asking it to investigate and sanction the lawyer for what he called unlawful conduct.

He said it was shocking that a lawyer should behave in such a barbaric manner.

While throwing more light into the incident, he said it all began when he disengaged the lawyer and gave another counsel the power of attorney over the property.

He said the female lawyer did not initially hold a grudge as she handed over the property’s file to him, adding that two weeks after, she wrote a letter vowing not to give away the possession.

Obiakor said, “This house is my house, it was bought by my wife, though she is late now. We have a son who is a minor, I’m supposed to manage the property.

“I gave her a letter that I don’t want her again as the attorney, she said ‘Ok’, she accepted the letter, she even said I should not have written to her, that I should have told her orally, she agreed.

“But after about three weeks, she changed her mind again and wrote me a letter, wrote my new lawyer. Before then, I have asked everybody to pay through my new lawyer, because their rent is due this May. The former lawyer now came back, she is no longer my lawyer, claiming that she must manage the property, that my wife told her that she should manage it forever.

“I am alive, my son is alive, my wife has relatives who can testify that she never made such a dying declaration as was claimed by the lawyer.”

When asked how the tenants have been making payments, the landlord said: “they have been paying through me, even last year. They pay directly to my account.

“And I am not owing the lawyer, she is indeed the one owing me because last December she brought in a tenant here, collected money and till day, she has refused to remit the money to me.

“What happened here is unprecedented and very barbaric. How can a lawyer send armed thugs at the dead of the night to eject tenants from my house merely because she was disengaged?

“She claimed that my wife made a dying declaration on her sick bed and gave her a forever power of attorney. Isn’t that curious? Her plan is to tactically take over our property but that will not happen.

“If she is not happy that I disengaged her, the proper thing to do is for her to go to court and not to take laws into her hands."

Obiakor called on the Nigeria Bar Association, NBA, to sanction the lawyer “for bringing the image of the profession to disrepute.”

Also speaking, the two tenants ejected from the apartment, Pastor Joshua Chigbo and Ifeanyichukwu said it was a horrible experience.

“Yesterday night, three men came around 11 pm and knocked violently on my door. When I opened it, they said I should pick the last thing in the room and vacate, else they will remove everything.

“I asked them why? They said the lawyer said I am no longer a tenant here, that I should leave that night.

“Before I knew what was happening they jumped into the house, threw everything outside, I could not do anything because they were armed, though they are not policemen. They eventually padlocked our apartment.

“They held everyone at ransom till morning when they left, but I slept outside, just like my neighbour who also had his properties thrown out. I wanted to make calls, they seized my phone. Before they left in the morning, they collected EEDC cards for every apartment here, they went away with them.

“It is so shocking because we have done nothing to deserve this, without a court order, at the dead of the night.”

When contacted, the female lawyer, Victor-Okoli said that the landlord’s late wife, Mrs Elizabeth Obiakor empowered her to manage the property and that to the best of her knowledge she hasn’t been disengaged.

“Mrs Elizabeth in her death declaration, said that I should manage the property for her only son.

“So, if her husband wants to disengage our service, he should come to a round table with us and we will tell him what to pay us as outstanding debt,” she stated.

On why she sent armed men to eject the tenants in the night, she said “I didn’t send any armed men, to eject the two tenants. Those men were people the landlord had used to eject five tenants before in the property.

“Meanwhile, why did he ask the tenants to break the padlocks? If he felt that what the security men did was wrong, he should have gone to court.”