Sunday Igboho had made known his intention to shut down Lagos for a mass rally to sensitize residents about his secession agenda. 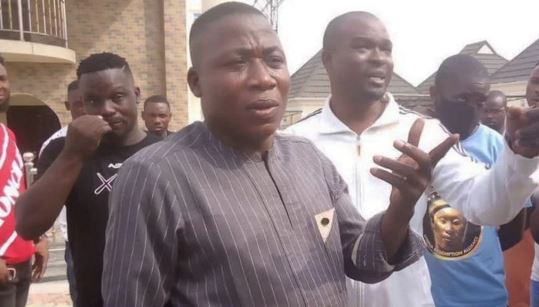 Sunday Igboho
Following plans by Yoruba activist, Sunday Igboho to storm Lagos for a rally, the Lagos Police has reacted.
According to the Lagos State Police Command, it is not aware that Igboho is planning to storm Lagos for a Yoruba nation rally.
Recall that Sunday Igboho had made known his intention to shut down Lagos for a mass rally to sensitize residents about his secession agenda.
It would be recalled that similar rallies were held recently in Ogun, Osun, Ondo and Ekiti States.
Igboho said he would storm the Centre of Excellence on July 3 for the next Yoruba nation rally.
But the police said they are not aware of any planned protest by Sunday Igboho.
The Lagos State Police Public Relations Officer, Muyiwa Adejobi, said this in an interview with DAILY POST on Monday.
Adejobi said the command would react appropriately when it is informed of the planned mass rally in Lagos.
Speaking on phone, Adejobi said: “I am not aware of that (Sunday Igboho’s planned Lagos rally). When the command is aware, the command will react to that. For now, as I speak with you, we are not aware of that.”
Sunday Igboho has been leading the agitation for the secession of the Yoruba race from the Nigerian nation.
Igboho has repeatedly asked killer herdsmen to vacate the South West region, saying “we can’t be slaves in our fatherland.”
Top Stories