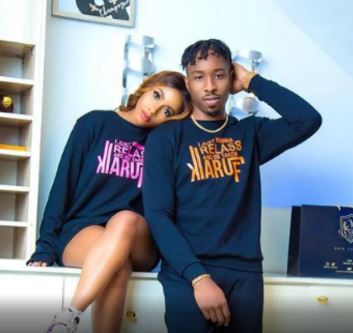 Mercy and Ike
Former Big Brother Naija Housemate, Ike Onyema has been called out by fans for mocking former lover, Mercy Eke.
The reality star mocked Mercy Eke's accent in a new post on social media.
This comes as fans worry over Ka3na's accent during the BBNaija reunion show and wondered what she was actually trying to do.
In a post shared on his Instagram page, Ike, who seem sarcastic, said one of the accents in the ongoing BBNaija reunion is draining his battery, and this reminds him of someone he knows.
Ike Onyema opined that instead of faking an accent, Ka3na would have just used pidgin to convey her thought.
He wrote: One accent in this BBN REUNION S5 is draining my battery. Reminds me of someone I know. pidgin is allowed ohhhh.
Reacting, many social media users averred that Ike is shading Mercy Eke, and he’s still pained over their relationship breakup.
See reactions below:
lazera_botanicals wrote: If you don’t talk about mercy how will you remain relevant? Ewu gigolo, you failed in America and was packaged back here as a useless child and you are already loosing on fronts here in naija. Mercy has moved on and left you in the gutters where you belong so deal with it
moonikkitchen wrote: This is childish!
mamdamesuperior_19 wrote: Ike, always throwing shade. My nigga really pained
beddingshub.interiors wrote: If him no dey fear, he for come out straight naa instead of shading
koko_eem wrote: He should rest, nobody cares! They are cashing out, they don’t have to leech on a white man or woman. 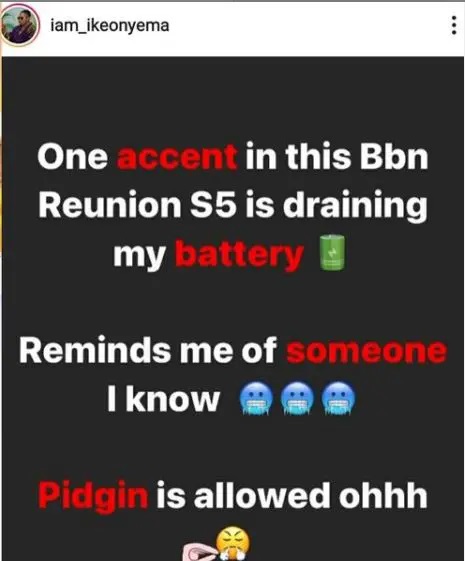