A spy of the Indigenous People of Biafra's Eastern Security Network has been arrested. 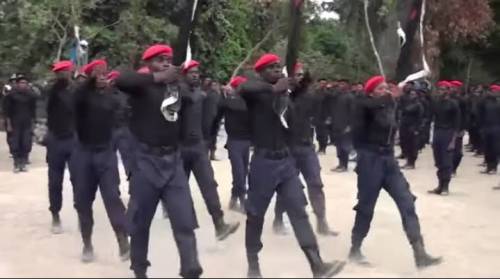 ESN
Police in Ebonyi state have paraded a 17-year-old boy accused of being a spy of the Indigenous People of Biafra's Eastern Security Network.
The teenager identified as Elom Daniel from the Ohaukwu Local Government Area of Ebonyi State narrated how he became a spy for the Eastern Security Network (ESN), the militia arm of the Indigenous People of Biafra (IPOB), and coordinated attacks on police stations.
The suspect, who was accused of arson and murder, was paraded alongside over 50 others on Tuesday at the Command’s Headquarters, Abakaliki.
Daniel, however, said he had never handled any rifle, but only gave information on places for attacks and how best to carry out such attacks.
Elom said his gang members decided to attack police formations when they noticed the force was maltreating South-East youths for no just cause but leaving herdsmen, who were killing residents of the region.
He noted that he gave information that led to the killing of police personnel and attacks on facilities belonging to the Independent National Electoral Commission (INEC) and other national assets in Ebonyi State.
“I always give information. I did it at Ishieke police checkpoint, the one at Amasiri Junction, the one at Onueke, and the one of CPS, in Abakaliki. I monitor places marked for attack before the attack.
“I normally visit people in the police stations to gather information there. After that, I will draw the map for attack on the police station and give it to the Eastern Security Network.
“It was my cousin that asked me to join Eastern Security Network, that when the freedom comes, my 50th generation will be enjoying it.
“It was my local government commander, Francis Nkwede, that made me ESN spy commander. He is from Izzi Local Government Area of Ebonyi State, while I am from Ohaukwu LGA. I am 17 years old.”
Top Stories