The soldiers serving in the Northeastern part of the country expressed their displeasure saying the government should give them more time. 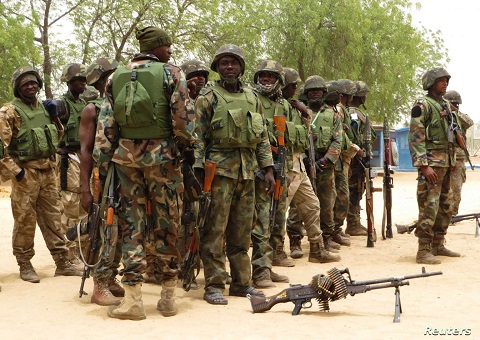 File photo
The federal government has been warned by some soldiers not to disconnect their lines as the deadline approaches.
The soldiers serving in the Northeastern part of the country expressed their displeasure saying the government should give them more time.
This comes as the Federal government announced an extension of the deadline for National Identification Number-SIM data verification to July 26.
But soldiers in North-East Borno have warned that their SIM cards must not be disconnected as that is the only means of communication with their family members and loved ones.
They stated that the government can insist on the deadline only if provisions can be made for National Identity Management Commission (NIMC) officers to get to the soldiers based in the bush, which might not be possible due to security threats.
One of the affected soldiers who spoke with SaharaReporters said, “Many soldiers are not happy, we are not happy with the decision of the federal government on the issue of NIN linkage with SIM cards and they are giving July 26 deadline. As useless as the Nigerian government is, it has refused to understand that there are soldiers who have been in the bush for more than a year without seeing their families and the SIM cards are the only means of communicating with our families and sending money to them. Now, the government is talking about blocking it without considering that there are people in the bush."
“It will take a journey of more than two days from the bush before I will locate Maiduguri town, the journey is by bus not on foot. The government is not considering this. Many soldiers are lamenting, we are not happy at all. If the NIMC blocks our SIM cards, I don't know what will be our fate, do you know how many soldiers are in the North-East?
"Seventy-five percent of Nigerian soldiers are in Maiduguri, just in one state, and we are in the bush and now the NIMC is talking about blocking SIM cards without considering people that have been serving their country for years, with no means to see their families, they shouldn't try it,” another soldier said.
When asked if there was a way NIMC officials could conduct the verification exercise for soldiers without the military personnel having to leave their duty posts, he said, “There are many bushes they will pass through before getting here. Civilians cannot even use the road. Even if they can get here, how about soldiers in other locations? What will they do? This thing is going to cause a problem in this country.”
In December 2020, the Nigerian Communications Commission (NCC) urged every Nigerian to get a National Identification Number and submit it to their network operators.
The commission also announced the suspension of sale and reactivation of new SIM cards because of an audit of the subscriber registration database.
A statement by Ikechukwu Adinde, NCC director for public affairs said the directive became necessary against the background of the “preponderance of pre-registered SIMs with the attendant security implications associated with the use of same to facilitate criminal activities”
Top Stories