Their arrest came after a Singaporean female victim lodged a police report in February that she could have fallen prey to an internet love scam. 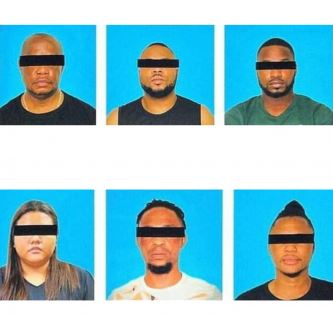 Six Nigerian nationals who are members of a transnational ‘love scam’ syndicate have been apprehended by the Malaysian police.

The group, according to the police, is believed to have scammed people of $64,000 in five different cases in Singapore and eight other cases in Malaysia involving 3.7 million Malaysian ringgit (about N365.5 million) in losses.

Singapore police on its website announced that its Commercial Affairs Department (CAD) of the Singapore Police Force worked with the Commercial Crime Investigation Department (CCID) of the Royal Malaysia Police (RMP) to jointly cripple the Internet love scam syndicate.

Their arrest came after a Singaporean female victim lodged a police report in February that she could have fallen prey to an internet love scam.

The victim revealed that her online boyfriend whom she had been together for a year, had purportedly sent her a parcel containing a handbag, shoes, and other accessories.

She subsequently received a phone call from a purported Malaysian “delivery company”, who allegedly requested for $1000 to be transferred to a bank account as delivery charges.

After making the transfer, the deliveryman allegedly claimed that he did not receive the money and asked for further payment in cash. The deliveryman was unable to provide information on his company and address when the victim had probed further. She was suspicious and reported the case to the Police.

Anti-Scam Centre of the Singapore Police Force said it carried out extensive investigations after receiving the complaint. “Through close collaboration and joint investigations with the CCID/RMP, a syndicate believed to be behind the cases was identified and established to be based in Malaysia,” it said in a statement.

The police said a 57-year-old woman was arrested while a 34-year-old man was investigated for allegedly assisting in the transfer of the syndicate’s criminal proceeds.

The woman will be charged on 29 June 2021 for money laundering while investigations against the man are ongoing.