In an interview with Daily Independent on Wednesday, Sagay questioned Bello over his ambition to become Nigeria's President. 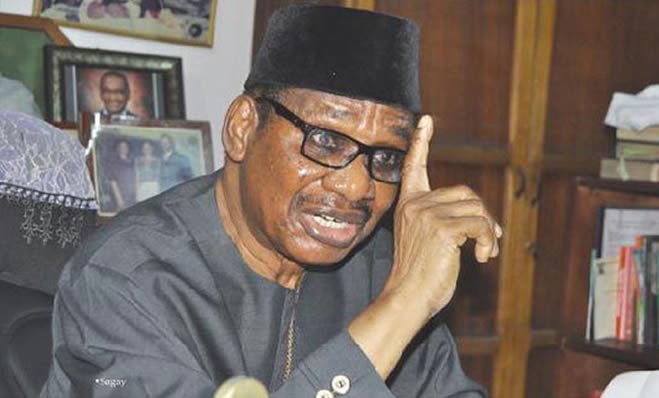 Prof. Sagay
The Governor of Kogi State, Yahaya Bello has been called out by Professor Itse Sagay SAN, Chairman of the Presidential Advisory Committee Against Corruption (PACAC).
In an interview with Daily Independent on Wednesday, Sagay questioned Bello over his ambition to become Nigeria's President.
According to Sagay, Bello does not have the record it takes to become a governor.
Recall that Kogi state workers were left begging for alms over the governor's refusal to pay them salaries for months.
The governor, in a recent interview, had said he is considering running for President in 2023 on the platform of the ruling All Progressives Congress (APC) as all Nigerians are asking him to run.
“Nigerians, the youth and women, and all Nigerians, including very objective elites are asking me to run for President in 2023. And I believe it is high time that we look into capacity, who can do the job, who is going to unify this country. And I think they are seeing something in me that they are asking me to come and unite and fix this country.”
However, speaking in an interview with DAILY INDEPENDENT, Sagay said Yahaya Bello needs to understand that by the zoning arrangement in the ruling party, it will be the turn of the South to produce the APC presidential candidate in 2023.
He said: “If he (Yahaya Bello) wants to run, he knows what to do. But he should know that this time around in 2023, it is the turn of the South. The North is already completing its two terms in the current dispensation and it will rotate to the South.
“But if he wants to go against that understanding and run, let him do so and let’s see how much support he is going to get.”
On the governor’s claim that Nigeria needs a youthful president in 2023, Sagay said being a youth is not an automatic qualification for becoming president.
“If he says Nigerians need youth as president, we have to select the youth we want, not anybody who can just jump in because he is a youth. Being a youth is not an automatic qualification for the presidency.
“So, he can do what he wants to do but nobody is committed to his line of thinking at all. I don’t know what record he is going to base his presidential ambition on.”
Top Stories