The DSS said a joint team of security operatives had raided Igboho’s residence early on Thursday based on an intelligence report. 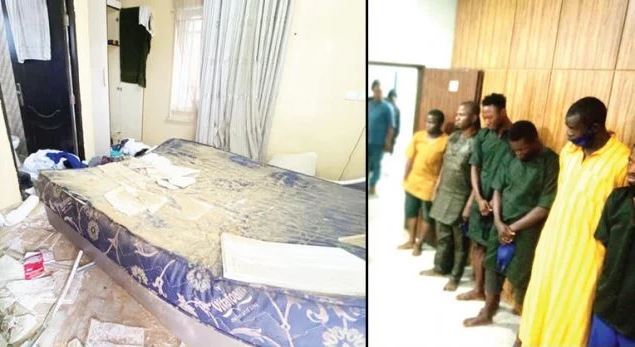 According to a report by The PUNCH, the Department of State Services, on Thursday, paraded 12 of Sunday Igboho’s followers, saying one other was being profiled.

The DSS said a joint team of security operatives had raided Igboho’s residence early on Thursday based on an intelligence report.

Parading the suspects at the national headquarters of the secret police, its spokesman, Peter Afunaya, said the security team was engaged in a gun duel by nine men suspected to be Igboho’s guards.

Afunaya stated, “A team of joint security operatives raided the residence of Sunday Adeyemo at Soka in Ibadan. This was based on intelligence that he had stockpiled arms in the place.

“On approach to his residence, the team came under heavy gun attack by nine men suspected to be Igboho’s guards. Six were armed with AK-47 guns and three others with pump action rifles.

“In the course of the exchange, two of the armed men were gunned down, while the rest were subdued and arrested. Only one operative, who was shot by the assailants in his right hand, sustained injury. He has, however, received medical attention and is very stable.

“The gun duel, which lasted an hour, offered Igboho the chance to escape. Sunday Adeyemo, aka Sunday Igboho, is now on the run.”

Others are three charm jackets/traditional body armour, two laptops, one Toshiba and one Compaq laptops and his passport and those of many others.

Afunaya added that five of the AK-47 assault rifles recovered from his residence were snatched from Nigeria Customs and Immigration personnel at Idi Iroko, Ogun State.

Afunaya explained that Igboho and his group, in the guise of campaign for self-determination, had become well-armed and determined to undermine public order.

He added the arrests and seizures were a confirmation of a grand plan by Igboho and his cohorts to wage a violent insurrection against the Nigerian state.

Some of his aides had said the invasion, which they alleged claimed the lives of five occupants of the house, was carried out by soldiers and operatives of the Department of State Services.

The Nigerian Army, however, said it had no hand in the attack.

One of our correspondents, who visited Igboho’s house, observed blood stain on the floor in front of the main building. Windows of some vehicles and buildings on the premises were shattered.

There was thick blood clot in one of the chalets, an indication that someone might have been killed or badly injured, and one of Igboho’s aides said the victim, who he identified simply as Alfa, was praying inside the building when he was shot in the head and died on the spot.

A resident of the building said although government agencies had been monitoring Igboho’s movements before now, the attack might not be unconnected to the Yoruba Nation rally scheduled to hold in Lagos on Saturday.

The Convener of the Igangan Development Advocates, Mr Oladiran Oladokun, who visited the scene of the attack, told one of our correspondents that the invasion of Igboho’s residence was an attack on the entire Yoruba people.

One of Igboho’s aides, who spoke on condition of anonymity, said, “Chief surprised every one of us, because the attackers were everywhere, but he escaped. The assailants came around 1.30am, scaled the fence and opened fire.

“I think the instruction they were given was to kill every living thing sighted on the premises.  A lady was the one directing them.  She was calling occupants of the house by their names.  That is to show that an insider gave them the information they relied on.

“They took away about N3m from his (Igboho’s) room as well as his jewellery.”

Another occupant of the house, who also spoke on condition of anonymity, said, “The assailants killed five persons and took away their corpses. Some ladies, who are wives of chief’s aides, were also taken away. They took away the CCTV box so that we won’t play back