The soldier, who spoke with SaharaReporters on condition of anonymity, said his colleague has since been battling with an ailment but his trip home was delayed. 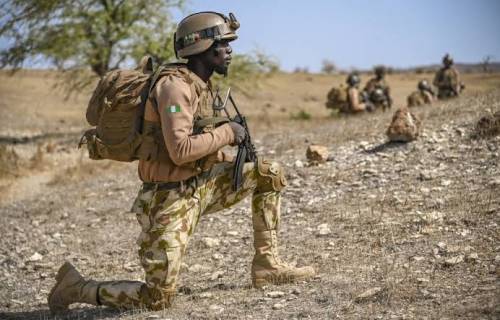 According to a report by SaharaReporters, a Nigerian soldier fighting Boko Haram in Borno has narrated how his colleague also at the front fighting insurgency died due to lack of medical attention.

The soldier, who spoke with SaharaReporters on condition of anonymity, said his colleague has since been battling with an ailment but his trip home was delayed.

He said in the absence of medical attention, his colleague wanted to go home to get proper treatment, but the trip was delayed, eventually costing him his life.

He said the colleague died shortly after he got home.

He said many other soldiers who are very sick are still in the bush fighting Boko Haram to the detriment of their health.

According to him, the standard procedure requires that such people should be taken off the front, given proper treatment, and allowed to get back on their feet.

"He was sick here in the bush, but he went home and died. The man had been dying slowly. I am tired of the country. I don't feel happy when wrong things are happening. I will soon quit the army to work in a place where I will have freedom of speech," he said.

"We still have some people that are medically unfit but are still here which isn't supposed to be so. It's sad because if this were to be a United Nations operation or that of the Economic Community of West African States (ECOWAS), they'll drop you even if it's only high blood pressure that you have.

"But now those that have health issues are here in the bush fighting. Were it to be an operation that they feel they'll make more and get other benefits, they'll deny them. This should not be the case but what are we going to do? That's the situation we find ourselves in at the moment,” he added.